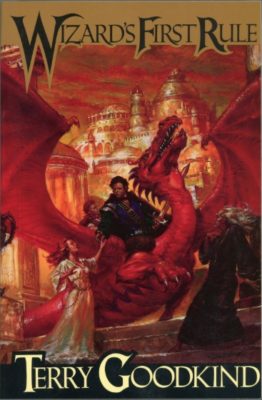 Terry Goodkind doesn’t seem particularly good or kind, although he’s definitely a Terry, so one out of three isn’t bad.

He is also not a fantasy author. It’s very important that you know this. Despite where he’s shelved in bookstores, despite what mythical creatures appear on his covers, he is not a fantasy author. Sample from this non-fantasy novel: “Magic!” the dragon gasped in mock fright. It put a claw to its breast. “Oh, please, brave man, don’t slay me with your magic sword!” It made a smoky rumble that Richard took for laughter.

In an infamous 2003 interview with USA Today, Goodkind responded to a question about Robert Jordan with “If you notice a similarity, then you probably aren’t old enough to read my books”. Jordan’s wizards, magic, and dragons are expressions of juvenilia, while Goodkind’s are an exploration of human truth, or something. Massachusetts-based grindcore band AxCx wrote a song called “Face it, You’re a Metal Band”. I wrote the previous sentence for no reason.

Goodkind is inseparable from early 90s fantasy, and a time when the genre was never more tedious, bloated, or unnecessary. Terry Brooks, Raymond E Feist, David Eddings were producing retreads of their past series, and Robert Jordan had begun work the massive monument to dead trees known as the Wheel of Time. So many huge fantasy books were released that bookstore shelves probably remember the era the way Cambodians remember the Khmer Rouge – a time of great suffering, where only the strong survived. In this market, Goodkind’s 900-page doorstoppers immediately found readers.

But what about the book?

The plot establishes a typical monomyth: young Richard Cypher is appointed as “Seeker” and must save a woman from the villainous Darken Rahl, who may need to work on his branding.

When I read it at age twelve, I was soon bored. The story wasn’t moving, and Goodkind has an astonishing ability to create confusion: a wizard character infodumps for thousands of words about what, exactly, a Seeker does, and I left the passage more perplexed than ever.

But then the pace picks up, and Wizard’s First Rule shows its colors as a violent, gritty human interest story of the kind that bloggers ten years later would call “grimdark”. It lacks the impact and power of George RR Martin’s books (in particularly, it’s not believable that the comically evil villain gets so many people on his side), but it’s still well beyond Jordan.

In particular, Goodkind seems to like rape. I don’t believe there’s a single female character in the book, if not the entire series, who isn’t raped or threatened with rape at some point. Two thirds of the way through, the plot takes an excessive but audacious turn into outright Gor territory, with Richard enslaved to a leather-clad dominatrix. This is probably the moment where Goodkind finally lives up to his “mature Jordan” claim. I’m conflicted on this part: it strangely works, giving Richard some of the most severe but effective character moments I’ve yet read in a fantasy book. But it also reads like a Gor book.

Even at its best, Goodkind’s work are foothills to GRRM’s mountains. His worldbuilding makes no sense: it’s established that fire is forbidden in Darken Rahl’s kingdom, but they seem to have no problems forging weapons, making pottery, cooking food, and so on. Writer’s convenience abounds: the typical way you escape danger in Goodkind’s books is to use or discover some new piece of magic that was never mentioned before.

I don’t recommend the books after three or four, which delve ever deeper into mumblecore obscurantism and Goodkind’s political opinions (he likes Ayn Rand). But the early ones do, in fact, have entertainment value, although I appreciate them as spectacle more than literature. Terry Goodkind might not be a fantasy author, but he’s not an entirely bad one, either.