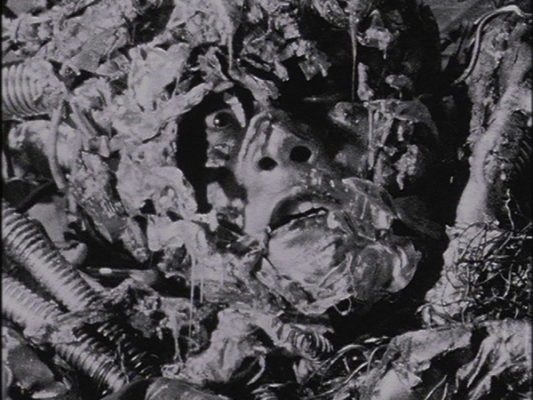 Have you ever read a book or watched a movie that was edited by a machine?

I once backed up an old hard drive which had begun to demagnetize. The photos are still viewable, but many are corrupt. Lines of pixels rip my face to pieces. Family photos are half-submerged in a fluorescent vomit sea.

The music files are worse. Many mp3s cannot be opened. The handful I can still play are filled with crackles, pops, squalls, and static. Sometimes I get halfway through, and then VLC Media Player crashes.

It’s a reminder of just how much is possible in the universe, and how little of it makes sense to the human mind. A couple of random edits on my hard drive transformed the familiar into the alien. We have used machines to reshape the world and make it comfortable…but what happens at the margins, when machines obey chaos and entropy instead of us? Will we survive, with our fragility? Will we want to?

Tetsuo is overtaken by a sense of fatalistic doom. The man’s fate is hopeless. He’s transforming, turning to metal like a junkyard Midas, and so’s the world around him. Tokyo used to have buildings made of cypress. Now, skyscrapers stand everywhere like tombstones. There’s no going back.

Even the human scenes have a lingering impression of the mechanical. The protagonist receives a phone call that consists of him and a woman saying “Hello?” meaninglessly at each other, like two modems failing to connect. As he does so, he awkwardly “reads” a newspaper by holding it an inch from his face, like a robot over-literally following instructions on how humans read. These are dramatizations of the 21st century, where we are so entwined with our tools that they hardly feel like tools. Soon, the tail might be wagging the dog.

Like David Lynch’s Eraserhead (probably a big influence), it’s shot in black and white, filling the frame with a chiaroscuro of palpitating metal. The editing is kinetic and violent, ratcheting from cut to cut. The soundtrack sounds like a set of Ginsu blades spinning inside a tumble dryer. There’s liberal use of stop-motion animation, which gives the special effects shots an epileptic jerkiness.

Tsukamoto directed two films before and two films after – all variations on the same theme – but Tetsuo: The Iron Man seems to have stuck around the longest. Its filming was a bad experience for him, marked by many production difficulties and most of his crew walking out. Maybe he wants to forget he made it. I won’t forget seeing it. You do not watch this film. It rams itself through your head with the force of a diamond-tipped drill, flinging corkscrews of brain matter out of the exit wound. The ultimate machine edit.