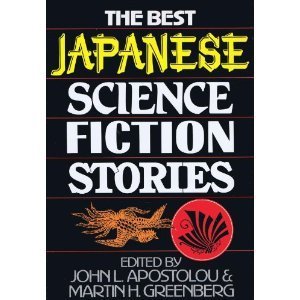 This book is superb. English readers will be either introduced to or reminded of Japanese sci-fi legends like Kobo Abe, Sakyo Komatsu, and Shinichi Hoshi. Calling these thirteen stories “science fiction” is a little like calling Watchmen a superhero story: correct, but they do other things besides. They are fantastic and surprising tales that attack the dendrites from various angles: comedy, horror, and raw surrealist speculation.

Kobo Abe’s “The Flood” is the psychotic tale of a class uprising beyond the dreams of Marx. Poor folk are literally turning into water and murdering their overlords by drowning them. With the planet rapidly becoming flooded with transformed proletariat, Noah (yes, that Noah) attempts to rebuild the ark and save the human race.

Ryo Hanmura’s “Cardboard Box” depicts the world as seen by a cardboard box. The only goal of a box is to be full, and we experience some of the box’s misery as it is sold and its contents (oranges, if I recall correctly) are removed, one by one, until it’s empty. Is there a happy ending for the box? Like “Animal Farm,” this story finds a balance between the comical and the serious.

“Tansu” by the same author manages to be rather frightening. A man’s family is possessed by a strange neurosis that nobody can understand, and eventually he is caught up in it. The ending explains nothing and everything.

“Bokko-chan” by Shinichi Hoshi is amusing but leaves the reader with a heavy heart. A mechanically-inclined barkeep builds an attractive android girl to help attract custom. Most of his regulars figure out she’s not real, but a deluded young man actually falls in love with her, mistakes her pre-programmed  responses for expressions of love, and so on. This story seems the most prescient in the internet age: it’s fits current topics like parasocial relationships and so on.

Shinichi Hoshii’s “He-y, Come on Ou-t!” is about townsfolk who find a bottomless hole. Soon the hole becomes a popular dumping ground for garbage. Partway through I had an inkling of where the story was going, but the ending still made me say “oh, shit.” Out loud.

Takashi Ishikawa’s “The Road to the Sea” is another story in the same vein, an interesting story with a gigantic whiplash of an ending. A boy is possessed by a burning hunger to see the ocean, and goes on a ill-fated journey to find it. Another twist ending, this one harder to see.

“The Empty Field” by Morio Kita is twelve pages of experimental prose. Weird, but okay.

Sakyo Komatsu’s “The Savage Mouth” is a gruesome nightmare about a man who eats his own body, piece by piece. Kind of like Stephen King’s “Survivor Type”, except where King flinches and ends his story, Komatsu keeps going and going. The final pages carry an interesting sociological edge.

“Triceratops” by Tensei Kono features a man and a boy who can somehow see dinosaurs walking around their 20th century town. Nobody else can see a thing. I don’t know if Kono was a fan of American TV shows, but it reads like a novelized The Twilight Zone or The Outer Limits.

“Fnifmum” by Taku Mayumura is about an alien lifeform which moves around in time the way we move around in space. More a world-building exercise than a story, but it’s unique and memorable. Mayumura has shown us a creature that is as alien as an alien can be, and still makes us relate to it.

Yasutaka Tsutsui’s “Standing Woman” is an Orwell-inspired story about a futuristic society that has found a disturbing method for greening its public places: criminals are literally turned into human tree. The story is told from the perspective of a pandering, spineless writer who is disgusted by how he isn’t standing up against the oppression. His own wife has become a tree, and his inner torment is portrayed brilliantly.

The final story is “The Legend of the Paper Spaceship” by Tetsu Yano. On the surface, it’s about a remote village that is home to a mentally retarded woman who never seems to age. What it’s really about is uneasy passage of lore, and the impossibility of untangling a skein of mysteries that happened many years ago and to people who are dead. Plot fragments are brought up, touched upon, and then we lose sight of them again in the dense world Yano has created. I have read this story several times and I believe I have figured out at least 65% of it.