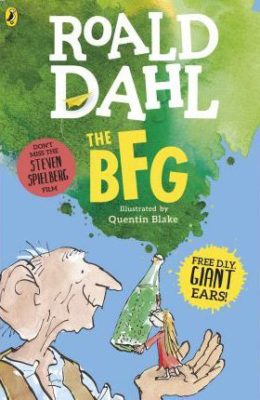 The BFG is a masterly masterwork of masterism, sublime in every way. The prose glides like a lubed-up manatee sliding face-first into a woodchipper. The drama makes my heart race like a 3.9 gHz Ryzen 7 3800x overclocked to 4.0 gHz for faster frame-to-screen time. The plot clicks like a Kalahari Bushman’s tongue pronouncing the word “!Xóõ”. It’s as re-readable as an affidavit when you’re a lawyer billing $800 an hour and the jury has crippling amnesia.

Also, it’s the only book that caters to my fetish: elderly 24-foot-tall men farting on people.

For a few moments, the Big Friendly Giant stood quite still, and a look of absolute ecstasy began to spread over his long wrinkly face. Then suddenly the heavens opened and he let fly with a series of the loudest and rudest noises Sophie had ever heard in her life. They reverberated around the walls of the cave like thunder and the glass jars rattled on their shelves. But most astonishing of all, the force of the explosions actually lifted the enormous giant clear off his feet, like a rocket.

Sometimes I have this dream. The BFG is climbing through my bedroom window, bearing his horn. There’s a mischievous twinkle in his eye. You can’t tell anyone, the twinkle says. This is our little secret. I hear his stomach gurgling, and it merges with the blood thundering in my ears as he unbuttons his bum-flap, two feet from my face, and…

…I’m oversharing. Sorry. My therapist tells me that I overshare. But how can I not? There’s SO MUCH left to tell…

I hope the BFG doesn’t get cancelled, because he’s one of Roald Dahl’s most politically progressive characters. He’s a vegetarian. And a pacifist! He’s even an anti-capitalist (he turns down a lucrative zoo gig, because he knows the zoo industry is rife with exploitation).

Yes, he’s had problematic moments – he participates in human trafficking, is party to an imperialist invasion, and says that Greek people taste bad – but cut him a break. Nobody’s perfect, and he’s trying his best. When Trump was elected he would have been out marching in the street, wearing a pussyhat the size of a bumbershoot. He would have #FeltTheBern. He would have put a black square on his Instagram. He would have bullied a YA author to suicide. 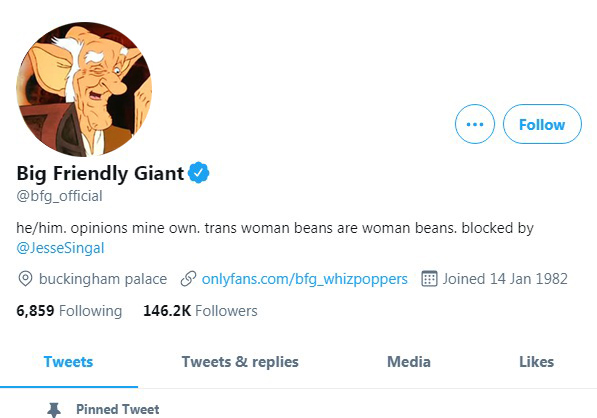 I’m curious, why did the BFG become so sensitive, so unlike the other giants?

His height might play a role. As I’ve mentioned, he’s 24 feet tall. This is small for a giant – the others are described as being 50 feet tall – and this could have sculpted his aesthetic sense.

Most beautiful things in nature are small, and when you’re large you tend not to see them. For example, the 24-foot-tall BFG sees roses that are 4x smaller than our roses. The 50-foot Bloodbottler sees 8x smaller roses. They’d just be tiny specks of color, he’d have to squint to see the petals, and he certainly wouldn’t be able to smell their scent. It’s a sad life, and I rather feel for the Bloodbottler.

It makes you wonder how much we’re missing out on by being as big as we are. Sand is actually quite pretty under a microscope. Due to our size, we just see a gritty, coarse gray, all the colors blending together and cancelling out. But imagine being a 1 millimeter human, wandering through a sea of beautiful jewels. Perhaps there’s a diatom squirming between the grains. You could sling a leash around it, and have a diatom for a pet. Wouldn’t that be neat?

Topic shift: how much food do giants eat?

According to the BFG, giants devour a couple of humans every night.

‘That means,’ said Sophie, ‘that somewhere in the world, every single night, nine wretched people get carried away and eaten alive.’

‘More,’ said the BFG. ‘It is all depending, you see, on how big the human beans is. Japanese beans is very small, so a giant will need to gobble up about six Japanese before he is feeling full up. Others like the Norway people and the Yankee-Doodles is ever so much bigger and usually two or three of those makes a good tuck-in.’

Is this realistic? How many people would a 50 foot tall giant need to eat?

The human body contains 130,000 calories (according to someone on Quora whose sums I didn’t check), meaning the BFG’s estimate of 2-3 large humans per giant per night is…

…spot on. Either Roald Dahl guessed with surprising acccuracy, calculated it himself, or knows more details about the giant digestive tract than haunt my forbidden midnight fantasies.

However, there are some scientific issues with the book. An egregious example: 24-foot men can’t fly by farting. More interesting is the notion that humans taste different depending on where they come from.

‘But do these disgusting giants go to every single country in the world?’ Sophie asked.

‘All countries excepting Greece is getting visited some time or another,’ the BFG answered. ‘The country which a giant visits is depending on how he is feeling. If it is very warm weather and a giant is feeling as hot as a sizzlepan, he will probably go galloping far up to the frisby north to get himself an Esquimo or two to cool him down. A nice fat Esquimo to a giant is like a lovely ice-cream lolly to you.’

‘I’ll take your word for it,’ Sophie said.

‘And then again, if it is a frosty night and the giant is fridging with cold, he will probably point his nose towards the swultering hotlands to guzzle a few Hottentots to warm him up.’

‘Nothing hots a cold giant up like a hot Hottentot,’ the BFG said.

Clearly, the giants are falling prey to the placebo effect.

In Frédéric Brochet’s infamous 2001 wine study, wine tasters were unable to distinguish between red wine and white wine that had been dyed to look red. Suggestion is a powerful thing. Eskimos live in a cold place, so the BFG expects them to taste cold. Wales sounds like the word whales, so the BFG expects Welsh people to have a fishy taste. He’s not to blame. He’s a prisoner of the Sapir-Whorf hypothesis. I wonder if the snozzcumbers really do taste bad, or if the BFG has been primed to assume a bad taste because of their disgusting name.

Lastly, the giants are made of a weirdly light substance.

In Quentin Blake’s illustrations, we see captured giants being airlifted by the British RAF (this brutal and unprovoked attack on a sovereign country would later be condemned by the International Court of Justice, and played an important role in Margaret Thatcher’s Conservative Party being voted out in the 1990 election. They don’t show you that part in the book.) 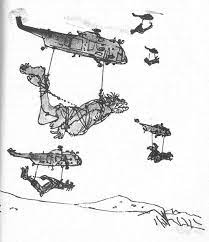 From the shape, these helicopters appear to be the Westland Sea King, which has an unloaded weight of 6,387kg and a maximum takeoff weight of 9,707kg. So the giants, incredibly, weigh less than four metric tons, not the 46 tons I calculated above. It’s very odd.

Either that or the British RAF maintains a fleet of mega-sized Sea Kings, just in case such an event occurs. I’m going to bed. Perhaps I’ll have the dream again. I’ll keep you posted.