The Camp of the Saints – Jean Raspail 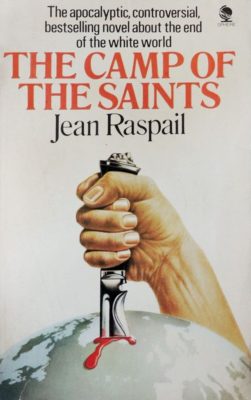 Le Camp des Saints is a 1970s anti-immigration novel that remains eternally in the public mind thanks to pro–immigration activists. Every few months a new op-ed appears somewhere informing the reader that this evil, racist book still exists and remains evil and racist. Like Solanas’s SCUM Manifesto, it’s hard to defend, easy to mock, a useful albatross to hang around your opposition’s neck. Voltaire said “oh Lord, make my enemies ridiculous.” Saints achieves this so effectively that it will probably remain in print for a hundred years.

The story is a dystopia. Overpopulation has turned the Third World into a simmering Malebolge of starvation and poverty. A sea of refugees threaten to overwhelm the West, while deluded liberal politicians tunnel holes in the walls. The crisis reaches a head when an army of Indians (enabled by a weak, dissimulating “atheist philosopher” called Ballan) hijack a fleet and sail for France. As the armada approaches, the government faces a choice: should the refugees be allowed in? They deliberately packed enough supplies for a one-way trip, and they’ll die if turned away.

To state the obvious, the book is indeed bigoted. Raspail does not like foreigners. They’re described as “a mass of human flesh”, “a million flailing savages”, “a river of sperm”, “unbridled, menacing hordes”, “cholera-ridden and leprous wretches”, “columns of ants on the march”, a “numberless, miserable mass”, “a welter of dung and debauch”, and more. Tolkien didn’t write about orcs with such vituperation.

Saints might be the most splenetic book to achieve mainstream success in a century.  It’s written in squalling, thundering prose that seems shouted at the reader through a bullhorn. Characters are painted with one broad stroke, and usually never a second one. In the first pages we meet the first of many strawmen of the pro-immigration left – a white college kid who has embraced Islam and atheism simultaneously (?), is helping the refugees make landfall so they can destroy French culture (?!) and who wants to rape his sister (?!?!). But first he’s going to smoke pot and shoot dope on the beach. This character amazed me: he was like a caricature from a Jack Chick tract.

Saints is a queasy and miserable nightmare. I doubt many finished it, and the ones who did probably didn’t immediately plan a re-read. But it has an intensity to it, and once you adjust to the content, it’s strangely readable. Raspail has a “Nouveau French” prose style that’s equal parts classicist and camp (“there was no lack of clever folk, willing, from the start, to spread endless layers of verbal cream, spurting thick and unctuous from the udders of their minds”) and quite amusing. It’s a book written out of passion, not cynicism.

The moral issues Saints raises are interesting and important, however much you disagree with the book’s handling of them.

Race is a stalking horse for Raspail’s true issue: overpopulation. The Indians aren’t bad because they’re Indians, they’re bad because there are too many of them. They reproduced to excess, used up all their country’s resources, and now want to take other countries down with them. This might seem a distinction without a difference, but it creates a covalence with many thinkers and intellectuals from the period, not all of whom were on the far right.

Overpopulation was much on the public mind in the 70s (and 80s, and 90s). The ghost of Thomas Malthus[1](For the record, Malthus was an original and clever thinker, but he made mistakes. His argument was that human population must increase exponentially – two people, four people, eight people … Continue reading) began stirring and rattling chains. “The population is doubling every forty years! How will we feed, clothe and house them all? What happens to the environment? We’re going to be back in the bad old days: wars, famines, plagues, deforestation. Wouldn’t it be kinder for everyone if we could…*cough*…control the population somehow?”

This is why your Infowars-obsessed dad keeps finding quotes by “elites” such as Ted Turner about reducing the population. It’s also the reason The Camp of the Saints was published by a mainstream press and read by academics, instead of “published” by a hand-cranked press at a neo-Nazi farmstead and “read” by the prosecution at the author’s hate speech trial. “There’s too many people, and lots of them will have to die,” absolutely wasn’t a fringe viewpoint fifty years ago, and Raspail’s hymn had many voices in the choir, although most hid their views in liberal language.

In 1968, Paul Erlich wrote The Population Bomb, full of cheery asides like “the battle to feed all of humanity is over”, and “hundreds of millions of people are going to starve to death.” The book sold hundreds of thousands of copies and got its author on NBC’s Tonight Show. In 1995 Lester R. Brown wrote a book called Who Will Feed China? (making China sound like the monster in Little Shop of Horrors, ravenously eating), complete with a photo of sad-looking Chinese kids on the cover. Radical leftist Pentti Linkola spent decades recommending drastic population reductions by coercive means, as seen in his famous “lifeboat ethics” metaphor.

“What to do, when a ship carrying a hundred passengers suddenly capsizes and there is only one lifeboat? When the lifeboat is full, those who hate life will try to load it with more people and sink the lot. Those who love and respect life will take the ship’s axe and sever the extra hands that cling to the sides.”

Note that these brutal “sever the extra hands” solutions were always directed at brown people. White people used far more than their share of the planet’s resources, but somehow it was always the mother in Senegal with seven children dooming the world. It’s an uncomfortable legacy that the left has spent a lot of time grappling with since (Google “eco-fascism” for more), and if you want to throw tomatoes at Raspail, save a few ripe ones for the 70s environmentalist movement, too.

But how the years condemn. Here’s Raspail’s introduction.

I HAD WANTED TO WRITE a lengthy preface to explain my position and show that this is no wild-eyed dream; that even if the specific action, symbolic as it is, may seem farfetched, the fact remains that we are inevitably heading for something of the sort. We need only glance at the awesome population figures predicted for the year 2000, i.e., twenty-eight years from now: seven billion people, only nine hundred million of whom will be white.

This year arrived twenty years ago, but this world arrived not at all. Raspail’s vision of the future never came to pass, and something happened instead that he didn’t expect: the Third World began rising out of poverty. The choice between saving the poor and saving ourselves never occurred: we can do both. The game is survival is not always zero-sum.

But I’m interested in the moral quandary Raspail poses. First, let’s grant his scenario. A million Indians are waiting to enter France. If they, they’ll destroy Western civilization (in the same sense that Spanish invasion of the new world “destroyed” the Meso-American civilizations). Don’t ask questions. This is the choice. What’s the correct thing to do?

I think the refugees should still be allowed in. Killing a million people is bad. And although the death of Western civilization might be worse, you’re weighing a certain bad at probability 1 (a million people will definitely die if we sink the ships), vs a maybe-bad at probability <1. How sure are we that Western civilization will be destroyed? We might have misunderstood the situation. It might be that Western civilization passes without mass suffering. The two evils aren’t equivalent. Throwing a brick blindly into a crowded shopping mall isn’t the same as throwing it in a remote wilderness, even though you can conceivably injure people in both cases.

Comparisons between Third World immigrants and Spanish conquistadors can only take us so far. Spain didn’t wipe out the Meso-American empires by flooding them with sheer numbers of Spaniards. They wiped them out with a superior technology base (steel, firearms, horses), as well as novel diseases that the natives lacked immunity to. This isn’t the case with refugees. They’re limited in their ability to cause harm. This isn’t to say there aren’t issues associated with immigration, but it’s not the same set of issues raised by an invading army or a superplague.

Lastly, we have to be pragmatic. If Western civilization can be overwhelmed by a million people on ramshackle boats, it was weak and wouldn’t have lasted much longer anyway. It may as well help some people as it dies.