The Castle of Otranto – Horace Walpole 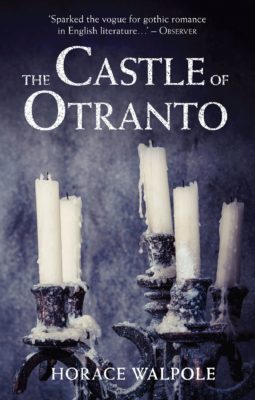 The Castle of Otranto was meant as a love letter to the past; instead, it inspired the future.

The book’s setting – an ancient castle full of sinister deeds, depraved nobles, and mysterious happenings – proved astonishingly popular, inspiring the Gothic literary movement and all its works. Books as diverse as Frankenstein, Titus Groan, The Turn of the Screw, Dracula, Northanger Abbey, A Rebours, Interview with the Vampire, the House of Leaves, and Harry Potter all bear the mark of Otranto, and its haunted visions of stone and stain-glass.

Its historical setting is loose: despite his interest in the period, Walpole knew little about the High Middle Ages. He guessed at (or invented) a lot of stuff, and Otranto has as many anachronisms as its castle has ghosts. His characters duel with fencing sabres, which wouldn’t be invented for hundreds of years. The confrontation between Manfred and Theodore is interrupted by the arrival of the “Marquis of Vicenza“, but the title of marquis/marquess/marchese was not used in Italy until the 14th century.

In one sense, Walpole lived closer to the Middle Ages than we do. In another sense, he lived further away. Modern medievalists have access to thousands of primary sources, scanned and translated and annotated, but 18th century Walpole was limited to whatever books he had in his personal library (or that of Cambridge University, where he studied).  Technology acts as a high-powered telescope back to the past; a telescope Walpole lacked. He himself was given to complain at the poor tools antiquarians of the time had. “…the original evidence is wondrous slender.”

But if Otranto never echoes the Middle Ages very strongly, this became a Gothic hallmark, too. The genre has a grand, dislocated effect – part history, part myth, part fairytale, part nightmare – that seems to float outside history, never settling on one period of time. It’s as frenzied and hot as an opium dream, as cold and marmoreal as a gargoyle statue. 20th century authors like MR James, Shirley Jackson, and so on were not above turning out minimally-updated variants of the Otranto formula: terse and fraught tales of things that go bump in the night.

The story: despotic tyrant Manfred loses his son in a tragic and absurd accident, on the day the boy was to marry the princess of a neighboring kingdom. He attempts to marry the girl himself, and consummate their nuptials on the spot (perhaps he was motivated by more than desire to preserve his bloodline), but she escapes, leading him on a chase through the vaults of Castle Otranto. He sees things that are not real, hears creaking sounds when nobody’s around. Hanging over this is an ancient prophecy; “”that the castle and lordship of Otranto should pass from the present family, whenever the real owner should be grown too large to inhabit it””. Manfred is doomed. The past – represented by the ancient Otranto castle – is reaching towards him, to take him everything he has.

This is a popular and perhaps central Gothic idea: that all houses, even ancient and grand ones, eventually die. Throw a ball in the air, and it will fall. Throw a cathedral spire into the air, and it will fall. Even if it’s anchored atop a mighty sky-spanning construct of arches, gables, tympanums, archivolts, balustrades, and buttresses, even if it’s  sanctified by prayers and blood and bones of saints, it will still fall. That’s the way of things: they come crashing down. Gravity is inescapable, and the only certainty is dust.

Walpole is modern in his outlook. He plays metafictional games, framing the book as a “lost work” that he is the translator of (needless to say, several of his contemporaries thought this was true). Amusingly, he takes time to throw brickbats at his own work.

“It is natural for a translator to be prejudiced in favour of his adopted work. More impartial readers may not be so much struck with the beauties of this piece as I was. Yet I am not blind to my author’s defects. I could wish he had grounded his plan on a more useful moral than this: that “the sins of fathers are visited on their children to the third and fourth generation.” I doubt whether, in his time, any more than at present, ambition curbed its appetite of dominion from the dread of so remote a punishment. And yet this moral is weakened by that less direct insinuation, that even such anathema may be diverted by devotion to St. Nicholas. Here the interest of the Monk plainly gets the better of the judgment of the author. However, with all its faults, I have no doubt but the English reader will be pleased with a sight of this performance.”

The story is funny – when and why did Gothic horror decide to be grim and humorless? The scenes where Manfred upbraids his slow-witted castle guards are almost out of Blackadder, and elsewhere Walpole is nearly as pithy and quotable as Oscar Wilde. “A bystander often sees more of the game than those that play”. Again, he appears to be taking the piss out of himself. The “translator” notes that the story contains “no bombast, no similes, flowers, digressions, or unnecessary descriptions.” This is the same story that has hilarious Romantic camp like “The gentle maid, whose hapless tale / these melancholy pages speak; / say, gracious lady, shall she fail / To draw the tear a down from thy cheek?”

Most literary fads are associated with eras, intellectuals, social movements, and locations. Gothicism is somewhat unique in that’s associated with architecture. Although Gothic books can be set anywhere (the memorable Vathek by William Beckford has a middle-eastern locale), the genre’s most at home in huge, ornate, castles.

Why castles? Firstly, they’re creepy. Second, they’re useful for a writerly logistics. A castle can plausibly contain secret passages, hidden vaults, deathtraps, dungeons, and other things useful to the plot. Thirdly, they’re isolated. That’s the important thing: the sense that there’s no escape. Castles are built with high walls to resist attack, but those walls can also seem like prisons. The BBC comedy Fawlty Towers derived much of its humor from the gathering tension of these people stuck inside a hotel. It’s a pressure cooker that you know is going to explode. Likewise, the best gothic novels induce a feeling of suffocating tension. And it’s all because of of the castles. It’s like you’re falling into a pit while wearing a stiff suit of armor, unable to move or see or breathe.

It’s pointless asking you to read Otranto.  It’s one of those books that’s inescapable. It looms across the literary horizon like the titular castle: figuratively and literally monolithic. You’ve already read most of it in the form of its countless spiritual descendants.