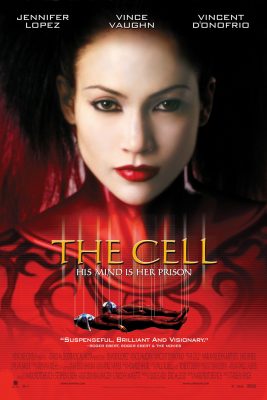 This film was preceded in 2000 by hype: it was a smart sci-fi horror film that would revolutionize a stale etc.

Movies are often preceded by hype – have you ever noticed this? Whenever a big budget film arrives, countless advertisements appear, all of them telling you to see it. How convenient. Almost as though someone’s being paid off. The human race sickens me. Anyway, I rewatched The Cell to see if it was as good as I remembered. Then I realized I’d never watched it in the first place.

It’s about a psychologist (Jennifer Lopez) who performs virtual-reality based therapy on coma patients, entering their minds and speaking to them inside Plato’s cave. After a serial killer (Vincent D’Onofrio) lapses into a coma while in police custody, she jacks into his mind to learn the location of his latest victim.

It’s indeed a “did I watch this?” kind of film. The story blurs into other “smart” serial killer movies like Silence of the Lambs, The Bone Collector, and Se7en. Even the title seems designed to be forgotten. The surrealist moments are great but the real-world scenes are thuddingly generic: how many shots of grizzled detectives standing and shaking their heads around crime scenes do we need?

Ignore the cop show crap and you have an oblique, arty film set in the disturbed (and disturbing) psyche of a sociopath. D’Onofrio’s mental landscape is basically a Saatchi exhibit on a bad batch of PCP, and J-Lo sees creepy dolls, mutilated animals, bondage equipment, and so on in her quest to finally understand why Private Pyle stole that jelly donut.

Some sequences are almost brilliant enough to redeem the film. When Lopez enters the throne room and encounters the King (and a driving, one-note stab of brass ratchets up the tension)…well, I was hooked. It was beautiful and frightening. It would have been even better if something had happened, but Lopez leaves the dream without payoff.

A recurrent problem with The Cell is that it doesn’t know what to do with its visuals. They’re strangely unmotivated, just hanging in the air without connection to the story. The surrealist stage dressing produces horror and awe, but it doesn’t build, it only exists. Much of the film’s imagery cannot be explained except as a show-offy director demonstrating knowledge of Very Important contemporary artists such as Damien Hirst, Tracey Ermin, and Sarah Lucas. Remember those three women, staring open-mouthed at heaven? Does this relate to the story or characters in some way? Nope, it’s an Odd Nerdrum painting. Name-dropping done on a 33 million dollar budget.

It’s frustrating to watch genuinely inspired scenes (suspended in a glass cube floating in space, Lopez pushes her way out of the top…and discovers it’s actually the bottom!) squandered amid “quotations” and “references” to whatever the YBAs and the New Contemporaries were doing that year. Who cares? I don’t like that stuff to begin with, and why not make your own art instead of regurgitating someone else’s?

Would the mind of a serial killer really look like a disturbing Alice in Wonderland mindfuck, as movies perennially portray it? I don’t know. When I read the Isla Vista shooter’s manifesto I was amazed at how dull and flat he seemed. More like a line drawing than an actual human. He wanted to be cool – that was his only ambition. When skateboarding became popular at school, he skated. When hackeysack became popular, he kicked a little bag around.

Like the film’s director, he spent a lot of effort imitating cooler kids, and when he saw behavior he couldn’t copy (boys having romantic encounters with girls), jealousy and frustration drove him to kill. Delving into his mind was somewhat interesting, but it wasn’t a Hieronymous Bosch painting. If you want a vivid mental landscape, mindjack a furry. That’s where the action’s happening.

The Cell is the first film of Tarsem Singh, previously (and afterward) known as a music video director. The pipeline from there to directing feature films is a troubled one. Music video directors tend to make films that focus on sets, sets, and more sets, with plenty of open space for a nonexistent rockstar to cavort around in. Movies need to be more than stage dressing.

Singh is obviously talented, with a good visual eye. I enjoyed a lot of the shots and costuming, and so on. But again, he’s mostly dropping names, not making a movie. The most famous scene in The Cell is the horse guillotine…

In the comments, various people offer analysis (“this boy’s mind had a morbid fascination with dissecting everything and seeing on the inside, not afraid to see the blood and guts. At the same time doing it in precise surgical fashion – each segment equidistant”), as if it’s not just ripping off Damien Hirst’s Some Comfort Gained From the Acceptance of the Inherent Lies in Everything.

Did I say ripping off? I meant quoting. Art builds on art – everyone knows this. It’s the highest form of appreciation to just put a famous work of art in your movie, unaltered, with no commentary or context. You’re quoting. Quoting is good.

What isn’t good is The Cell’s casting. Maybe don’t cast a massively famous sex symbol your quiet, mousy psychologist: Jennifer Lopez hasn’t a prayer of inhabiting the role written for her. Vincent D’Onofrio is a good actor, but he’s very wrong in this. He’s a blue-collar truck driver who comes off as a dangerous, slack-jawed idiot. We don’t believe for a second that a man like him would have an encyclopedic knowledge of contemporary art, or be hip to the London YBA scene. His pudgy, brutal face is impossible to feel sympathy for, which sours all the smarmy crap at the end. The killer was abused as a child! All he needed was a hug! Spare me.

The film, like its characters, fails to handle the distance between dream and day. Time and time again, the movie pulls us out of surreal fantasy and into its own stupid version of reality, so the usual Hollywood cliches can appear (the ticking clock, the generic FBI agents, etc).

The Cell is a disappointment of the worst sort: a bad movie that could have been a good one. It sends phantasmal imagery soaring into the air…and then shackles it to millstones of literalism and pretentiousness, sending it plummeting to the ground. I wanted something more or new. Not flashbacks to a tearful child being yelled at by his dad. I’ve seen all that before, and I don’t care.

Here’s an idea: why not reveal at the end that everything we thought we knew about D’Onofrio’s childhood was fake?

We’re in the mind of an unhinged lunatic, after all. Are his memories reliable? D’Onofrio has every incentive to distort the facts to create sympathy for himself – couldn’t his shallow redemption arc at the end be yet another trap for Lopez? Why wouldn’t a man capable of murder also be capable of deceit?