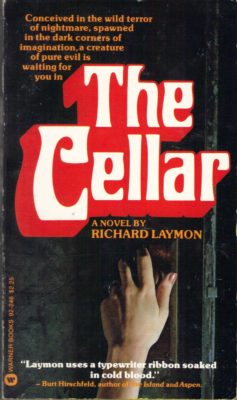 The Cellar (1980) is one the worst books I’ve read recently. It’s definitely the stupidest. Every person in it appears to have brain damage. I gave up on thinking about [any character]’s motives for performing [literally any action]; I never got an answer beyond “they’re idiots”. I don’t think it has a single killing, as all the characters legally qualify as non-sentient vegetables.

It’s a clear beneficiary of the 70s Stephen King horror boom; Warner Books must have been waving through any manuscript with scary monsters at that point. The Cellar became a minor classic in spite of itself and an early example (along with Jack Ketchum’s Off Season) of “extreme horror”, or “splatterpunk”: books that focus on extreme gore and shocking sex acts. Yes, Virginia, Richard Laymon paved the way for literary titans like Edward Lee, JF Gonzalez, James “Wrath” White, and several dozen other guys who should probably quit and get landscaping jobs.

Everything about The Cellar is bad. Its only redeeming quality is that Laymon doesn’t seem like a cynic. He was probably trying his damndest to write a good book, he just wasn’t any good at it. Generally, books make you ask questions. Who’s lying? Who’s the murderer? Will the dog survive? Here, the most germaine question is “if the book starts drooling and ruins my upholstery, can I sue the Laymon estate for damages?”

The opening scene is straight out of Goosebumps. It’s night, and a hard-headed father drags his fraidy-cat son to the creepy local mansion to prove that there’s No Such Thing As Monsters. There is, in fact, a monster inside, and it kills both of them along with a pointless cop character who seems to have wandered into the book by accident.

The beast is described as white, with a snout. What sort of snout, though? A dog’s? A pig’s? An aardvark’s? Lots of animals have snouts, and they all look different. I don’t magically know what the monster looks like just because it has a snout, Laymon. You’re supposed to use words to paint a picture here.

The mansion (we learn) is called the Beast House, and it has been the site of many slayings across seventy years. Two men form an unlikely partnership to solve the mystery. One of them, Larry is a traumatized basket case who was literally anally raped by the monster (…?). The other is a badass Rambo-esque former spec forces operative whose name is “Judgement”, in a typically subtle touch from Laymon. The two men journey to the Beast House, and begin a long process of researching the town’s history. Is there really a monster inside the Beast House? Or is it all an elaborate hoax?

Perhaps you can see the problem. The reader already knows that the monster’s real – we saw it in the opening scene – so the detective crap is a waste of time. We spend half the book impatiently drumming our fingers, waiting for characters to catch up to what we discovered in the first few pages.

The secondary plotline is even worse. A woman called Donna receives a phone call. Her husband has been released from prison. She puts down the phone, packs her daughter into a car, and drives far away, never to return. Her behavior seems so over-the-top and irrational that I wondered if Donna might be crazy, suffering from paranoid delusions. Maybe her husband’s just a normal guy, or nonexistent. That would have been interesting plot for a book: a daughter trying to survive a clinically insane mother who has her trapped in a car.

…But no, it’s real. Her husband Roy is a child-molesting mega-psycho who randomly kills every third or fourth person he sees and is tracking them down like the Terminator. The first rule of Laymon: if there’s a choice between a smart idea and a dumb idea, he always, always, always goes with the dumb idea.

Roy is the stupidest villain I’ve ever encountered. He has no motivation aside from raping and murdering his family. He’s stunningly incautious; he travels in a straight line from prison to the family home, discovers they’ve left, and flies into a rage at the nearest neighbor (causing them to call the cops). The guy’s an imbecile; it’s unbelievable that a man this incautious goes uncaught for five minutes. He couldn’t order a hot dog without attracting an all-points bulletin.

Donna’s no MENSA candidate herself. She drives and drives with no plan whatsoever, crashes her car in a ditch near the town containing the mansion, and then hooks up (literally) with Larry and Judgement before joining them on their quest to solve the Beast House’s non-mysterious mystery. There’s some skeevy Skinemax-level shit where she puts on a swimsuit and the guys ogle her. I was impressed that (while running from her psychotic husband) she found time to pack a swimsuit.

The sex scenes deserve to be quoted at length. He mounted me from behind, a manner unusual for humans as it is customary among many lower animals. At the first touch of his organ, fear wrenched my vitals, not for the safety of my flesh but for my everlasting soul. And yet I allowed him to continue. I know, now, that no power of mine could have prevented him from having his will with me. I made no attempt to resist, however. On the contrary, I welcomed his entry. I hungered for it as if I somehow presaged its magnificence. Oh Lord, how he plundered me! How his claws tore my flesh! How his teeth bore into me! How his prodigious organ battered my tender womb. How brutal he was in his savagery, how gentle his heart. This is written in the voice of a woman circa 1900, but still, wow.

The plot twists in stupid directions, impervious to any form of logic. I wonder whether Laymon ever wrote an actual ending – maybe I have to buy one of his other books to read it. The copy of  The Cellar I have doesn’t have one, I’ll tell you that.

Laymon did write a lot of other books, and their titles offer a window into his unique, inspired take on the horror genre. Nightmare Lake. Night Show. Midnight’s Lair. Endless Night. After Midnight. The Midnight Tour. Come Out Tonight. Friday Night in Beast House. Night in the Lonesome October. Night Games. Night Ride. The Night Creature. You can kinda see him cycling through every variation in the dictionary. He died in 2001, so the world will never see The Dark Midnight or The Night at Night, or The Night Tonight at Midnight.

Check out The Cellar to see just how bad horror got in the 80s. If Stephen King’s Carrie is “Wannabe” by the Spice Girls, Richard Laymon’s The Cellar is “No Way No Way” by Vanilla. Once, it was thought, horror called for understatement. The scares were more in what the reader didn’t see. Thank God Laymon and his copycats were there to show us the truth: real horror is about people having sex with animals atop a pile of mutilated corpses with their viscera arranged in a pentagram. Along with a detective story where you already know the answer. I’d have loved to have seen him screenwrite Twin Peaks: he’d probably tell us who killed Laura Palmer before she even dies.