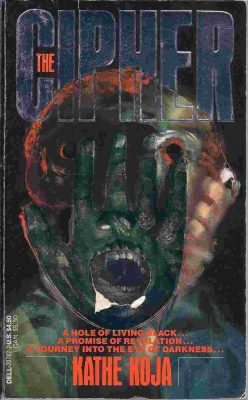 Horror novels have a shelf life of forever or five years, whichever comes first. Kathe Koja’s first novel The Cipher was published in 1991, won the Locus and the Bram Stoker, was critically acclaimed as a major work of the genre…

…and then went out of print for thirty years.

It has a sharp premise. Failed poet Nicholas (and his codependent girlfriend Nakota) find a black hole in storage cupboard. They begin dropping things into the hole on a string. Bugs grotesquely mutate into chitinous aberrations. A dead mouse turns into a Jurassic horrorshow with claws twice the length of its feet. Then they lower a camera into the hole…

The Cipher belongs to the micro-genre of “hole fiction”, which includes Stephen King’s From a Buick 8 and Junji Ito’s The Enigma of Amigara Fault and others I can’t recall. A fracture appears in reality; one that cannot be understood, only experienced. Things transform when they pass through it. The “holes” in these books are never actually holes, they’re a metaphor for some writerly stalking horse (the unexplainable, death, and so on). Early on, Nakota makes the observation that the Funhole (as they call it) only becomes active when Nicholas is around it. Why would this be true? What’s special about him?

Koja’s prose is striking. Her patented “kill all verbs” style shatters sentences into oblique, slanted observations, which collectively pile up into scenes, action, etc. Koja’s sentences are frag grenades, in both senses.

We waited quite a while, there in the dark, my back against the locked door, Nakota for once at my side. Her scent was higher, her breath never slowed; she tried to smoke but I told her no, not in that airless firetrap, firm whisper, as firm as I ever got with her anyway, and she gave in. The insects jumbled, up and down, fighting the barrier they couldn’t see, then, “Look,” her sharp whisper but I was looking already, staring, watching as the bugs, one by one, began to drop, dying, to the floor of the jar, to whir in minute contortions, to, oh Jesus, to change: an extra pair of wings, a spare head, two spare heads, colors beyond the real, Nakota was breathing like a steam engine, I heard that hoarseness in my ear, smelled her hot stale-cigarette breath, saw a roach grow legs like a spider’s, saw a dragonfly split down the middle and turn into something else that was no kind of insect at all.

Koja, more than any author I’ve read, writes the way people see. We perceive vision as continuous, but it’s actually made up of thousands of micro-adjustments called “sacchades”. We flick from thing to thing, and gradually a picture of our surroundings emerges. It seems instantaneous, but it’s more like a painter’s process. One brushstroke. Two brushstrokes. The Cipher’s style is an effective evocation of this process.

The setting’s a grimy urban environment, with dirty snow, broken central heating units, rust, and dying video stores. Koja’s big on art in all its forms, and stuff like cinema and sculpture appear in the story, to varying impact.

Not all the story choices work, and The Cipher ends up being more good than great. After some fantastic early scenes, the momentum falters. A couple of new characters get added who don’t seem particularly relevant but succeed in padding the book out for another 100+ pages. The problem with elegant concepts is that it’s hard to get a novel out of them. The Cipher would have hit harder as a novella. As it stands, it has a stretched quality. Like a 4:3 video stretched to 16:9, or a 45rpm played at 33rpm.

edit: I have since learned that The Cipher was adapted from a work of short fiction, which makes sense.

The shocks (which are initially powerful) become increasingly broad and heavy handed, and verge on comical at a point. There’s moments in the book that read like a Chucky screenplay. They don’t ruin things, but the narrative felt like it needed a subtler hand at times.

Koja’s later work is more confident. Bad Brains shows the umbilicus chaining artistic ambition to madness (and vice versa). Skin documents a world of metal and gears where carbon-based lifeforms fear to tread. But The Cipher has its own charms: it’s very visual for a book, and would work well as a movie. Ironically, because Nicholas is doomed from the moment he begins filming the Funhole.