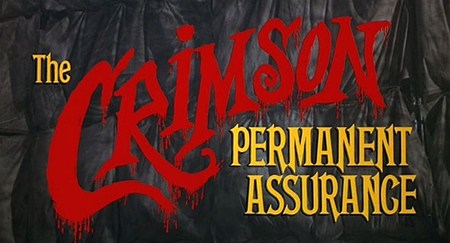 This featurette opens Monty Python’s 1983 film The Meaning of Life, and is my favourite part of the film. Hail Terry Gilliam.

It’s a parody of a pirate movie, filled with swordfights and swashbuckling and people yelling “‘ard to starboard!”. But as with Brazil, it’s actually a kind of fear teabag, steeped in subtle flavors of alarm, disquiet, and anxiety, releasing those flavours upon repeat viewing. You can’t separate The Crimson Permanent Assurance from the year 1983, or from Britain.

Incredibly, people once trusted banks. Almost. The local bank was like the local butcher: probably holding a finger on the scale, but at least you thought you understood him. He was part of your community. He was yours.

In the 80s, that started to change: the globe shrank, trade deals and computerized systems enabled companies to spread their tentacles across continents and oceans, and suddenly your bank was no longer part of your community. It was a shadowy, alien thing from somewhere else. Maybe the outer dark.

Finance has always had aquatic metaphors. Cash flow. Liquid assets. Trickle down. Mutual pools. Skimmed profits. As the financial sector exploded in size and complexity, the metaphors became more pointed. Loan sharks. Corporate raiders. Headhunters. Buccaneers. The idea that finance firms had become something akin to pirates is a compelling one. Amoral entities afloat a sea of cash, with no masters, no Gods, no loyalty but to the firm, flying the flag of civilized commerce only when it suited them. Scuppering enemies with leveraged takeovers. Burying treasure in offshore tax havens. Terry Gilliam’s idea was to make the finance = piracy metaphor literal.

The featurette opens with a bunch of elderly accountants slaving at their desks, while young men with American accents boss them around. (This reflects another British anxiety from the period: that venerable and supposedly honest British institutions would be swallowed by faceless American corporations). When one man gets fired, the rest mutiny, throwing their American overseers “overboard”. They then turn to a life of crime, sailing their building through London as if it were a ship, plundering and pillaging.

It’s a great bit of absurdist comedy, and Gilliam has fun turning accountants into pirates. They wield “cutlasses” made from the blades of office fans, fire “cannons” that are actually spring-loaded desk drawers, etc. There’s little Pythonesque wordplay, and almost every joke is a visual one. It’s almost like watching a comedy sketch made for deaf people; although they’d miss out on the bombastic score.

There’s the usual artsy film touches. The Crimson Permanent Assurance building is almost comically antiquated, even older than the men inside it, but the buildings they plunder are sleek and modern, webs of glass and steel spun by giant spiders (emphasising a theme of old vs new). The opening shot of downtrodden accountants hunched over rows of desks is matched with a parallel shot of the same men pulling oars in a Roman slave galley. The amount of money spent on tiny details must have been staggering. That list of subsidiaries on the corporate boardroom of the Very Big Corporation Of America? There’s actual stuff written there.

The film ends with the narrator cheerfully describing how The Crimson Permanent Assurance took on the world with their business acumen…and we see bleak shots of the building sailing across a desolate skyline, having destroyed everything. Then it falls off the edge of the world, and the rest of the movie begins.

The Pythons each brought something special to their troupe. Cleese and Jones had their characters, Idle had his music, Palin had his writing, Chapman had his dramatic acting skills. But the visions? The dreams? Those, in large part, came care of Mr Gilliam, and here’s proof, sailing across the main.