The Drawing of the Three (The Dark Tower II) – Stephen King 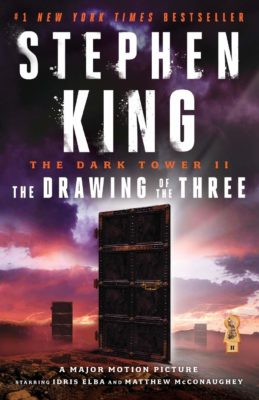 A great book. The best Dark Tower novel? Yes. The best Stephen King novel? Possibly. It has one of his best lines, anyway.

He thought: Very well. I am now a man with no food, with two less fingers and one less toe than I was born with; I am a gunslinger with shells which may not fire; I am sickening from a monster’s bite and have no medicine; I have a day’s water if I’m lucky; I may be able to walk perhaps a dozen miles if I press myself to the last extremity. I am, in short, a man on the edge of everything.

I don’t want to think or write about The Drawing of the Three: I want to re-read it. It’s coked-up and manic, bouncing off the walls like a kid in a small room. The plot moves unbelievably fast – only The Running Man is paced faster, and not by much. It’s ludicrously overstuffed with thrills: later Dark Towers can have a cosy, rambling feel; here the tension drawn so tight that each line seems ready to snap. You can almost cut your finger on the flat side of the page.

It picks up the tale from where The Gunslinger ended it: Roland (the last guardian in a dead or dying world modeled on our romantic image of the Wild West) has just damned his own soul in his quest for the mythic Dark Tower. Alone and friendless, he collapses from exhaustion on a beach, and is attacked (and mutilated) by a monster from the waves. Soon he’s becoming desperately and incurably sick – either his wound is infected, or the monster was venomous. He realizes that he might die before he ever finds the Tower, and attempts a series of “drawings” – rituals bringing other gunslingers (or equivalent gunslingers) from other universes into his world. He hopes they’ll either save his life or fulfill his quest for the Tower after he dies. All he knows about these supposed allies is a shred of biography. There’s a man in thrall of a demon (unknown to Roland) called “Heroin”, a woman who appears to have a split Jekyll-and-Hyde personality, and the personification of death itself.

Roland proves to be just as strong an anti-hero as he was in the book before. The drawings are little more than abductions. He will not take no for an answer, and he has no intention of allowing the proto-gunslingers (who, as chance would have it, all live in 20th century New York) to leave. He has good reasons for doing this – he believes the Tower will soon fall, spelling the end for the last pitiful dregs of creation, unless someone saves it. But it makes him as dark as the tower he’s chasing, and turns him into Clint Eastwood’s Angel Eyes, as menacing as he is heroic.

The Drawing of the Three isn’t perfect. The first third of the book spends a lot of time in Miami Vice territory, featuring cocaine smuggling and DEA agents and cartoonish gangster types: it’s fun but runs a little long. Eddie Dean’s backstory is also overdeveloped considering how uninteresting it turns out to be. The book also features a serial-killer yuppie character that seems ripped off from American Psycho (it’s not – The Drawing of the Three was published four years earlier): a great idea that King could have done more with. Detta Walker proves herself the book’s most inspired villain by the end, not Jack Mort.

But there are far more things that work. Huge swathes of the book are just “a guy walking alongside a beach”. Instead of dead zones in the plot, these become fraught with tension thanks to the ticking clock of Roland’s sickness (which also allow King to explore Roland’s backstory through fevered hallucinations of life before the world apocalyptically “moved on”). Roland was an almost unbelievably good gunfighter in the first book, effortlessly gunning down dozens of people, so King makes the few shootouts interesting by giving him unreliable ammunition (Roland unwisely allowed his shells to become wet by sleeping in wet sand, and many of the bullets he chambers in his revolvers misfire). This is great, effective storytelling, killing lots of birds with very few stones.

And there are hilarious moments too, particularly the parts where Roland (a man from another world who is as much an Arthurian knight as he is The Man With No Name): has to interact with foul-mouthed New Yorkers. This was a big part of what sunk the later books for me: it killed the atmosphere of King’s Lovecraftian Western “Mid-World” to have characters name-dropping Hollywood movies and baseball teams every few pages. But here, the lightness serves a purpose, cutting the dread to manageable levels, like the baby powder in Eddie’s heroin.

The Dark Tower, at its core, was King’s merging a Lord of the Rings-type epic fantasy quest with genre conceits of a Leone/Sturges/Peckinpah Western. The concept went off the rails for various reasons worth explaining at length, but it’s interesting that the best book in the series had the least time for leather-slapping cowboy cliches. The Drawing of the Three has no cattle rustlers, no dusty red canyons, no bars with batwing doors, one Mexican standoff, certainly no war-whooping Injuns or sniggering bandidos. Instead it’s a fantasy-horror story of a man and his magic, going to other worlds.

King often does his best work with very sparse plots. I’ve heard it said that videogames work not by letting you do things but by not letting you do things (Super Mario Bros would be no fun if Mario could fly, for example), and King has a similar property: he gains strength under restrictions. You can tell the story of Misery, Gerald’s Game, The Shining, in a single, reasonably short sentence. But just as very good sketches can suggest more detail than a photorealistic drawing, King’s threadbare stories never fail to gain largeness and life.