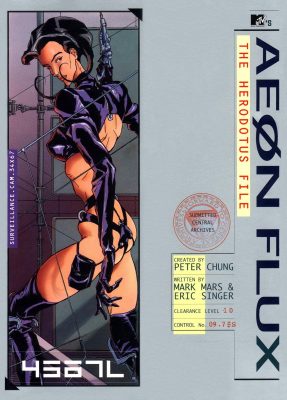 “I have been accused of caring nothing for the truth, but o­n the contrary, I value the truth so highly that I make sure it is hidden away someplace safe, where it is not soiled by dirty hands, embarrassed by prying eyes, or worn out through overuse.” – Chairman Trevor Goodchild

Aeon Flux is an animated exploration of psyche and politics. It’s a hard show, a cult hit where “cult” rings truer than “hit”, and it raises questions that carbon-based minds are ill-equipped to answer.

Casual viewers of the show can’t let go of the idea that Aeon Flux’s ambiguities are actually puzzles with solutions. Why are Monica and Bregna fighting? Were Aeon and Trevor ever in a relationship? We’re not supposed to know the answers to these questions, and episodes like “Utopia or Deuteranopia?” (featuring a deluded disciple who painstakingly “deciphers” his master’s encoded notes, only to learn they’re garbled madness) deride you for caring. But it’s still the typical line of analysis Aeon Flux receives: witness this grueling interview where Peter Chung is asked whether Aeon is a robot, a cyborg, or a clone. I mean, she keeps dying and coming back to life and surely there’s a rational explanation for that, right?

In 1995, MTV’s publishing arm decided to explain Aeon Flux’s universe once and for all – something like The Star Fleet Technical Manual may have been the model – and commissioned a few writers to create a book. I doubt they wanted anything like the Herodotus File, but they still put it in print. It was reissued in 2005 to tie in with the craptacular Charlize Theron movie.

It’s framed in a clever way: as a dossier from Bregna’s internal police. It’s a little like The Screwtape Letters, written by bureaucrats for bureacrats, dripping with a mixture of pathological malice and corporate bullshit.

Basically, Bregnan leader Goodchild seeks to crush a heretical Monican movement that claims that Monica and Bregna were once a single state called Berognica, and the dossier provides rap sheets on all of Monica’s most feared operatives – including Atilda Ram, a 657lb belly-dancer who smuggles contraband inside the folds and orifices of her body, and Loquat, who can adopt any disguise or identity perfectly (even being two different people in the same room!), thus creating uncertainty about whether he/she even exists.

The most fearsome of these characters is Aeon Flux herself, whose interests include infiltration and domination. She does modeling on the side. 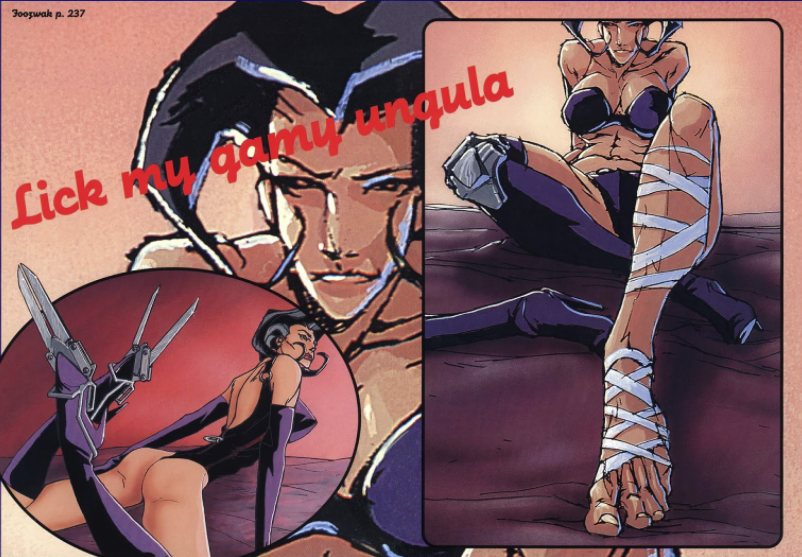 The conflict between Bregna and Monica is ultimately just a proxy war for Aeon and Trevor’s deeper, weirder struggle. They have the one of the most unique relationships I’ve ever seen in fiction. They pretend to want to kill each other but clearly don’t. They both ignore countless opportunities to pull the trigger. They care very deeply about each other in a way irreduceable to mere love or hate.

Basically, Trevor Goodchild is a benign Orwellian dictator. He’s not a villain, but he’s often misguided. He wants to progress humanity, and views morality as a constraining process. Or as he puts it: “one doesn’t want to be trapped into making a particular choice simply because it’s right.”

Trevor lives in the hell of every totalitarian dictator; he can’t tell the truth to the people, and his underlings deceive and backstab him in turn. The gulf between what he wants and what he gets is incommensurable. He seeks to build a rational, open society, without secrets, yet he exists in nest of snakes, unable to trust or connect with anyone.

Aeon Flux exists in a hell of her own. She’s free…which means she’s a slave to chance and consequence. She has the liberty of a moth in a flame. Her actions almost always have nasty, unforeseen consequences (both for herself and the people she cares about) and unlike Trevor she can’t even hide behind noble intentions. The reverse of hell is not heaven.

The Herodotus File was written by Mark Mars and Eric Singer. Mars is a colorful guy Peter Chung met at CalArts. He has done virtually nothing aside from Aeon Flux, but he created many of the show’s most electric moments (“ready for the action now, danger boy…?”) Eric Singer was a lowly production assistant who cold-called Chung one day. He is possibly the most financially and critically successful person ever associated with the show (he was nominated for an Oscar Award for American Hustle, and co-wrote an upcoming Tom Cruise vehcle).

The danger of a book like this is that it will talk the show to death. Aeon Flux discusses universal problems of censorship, surveillance, etc. This goes away when you specifically place it (as the movie did) in a particular point in time, such as the far future. Specifics are the enemy.

The book threads this needle by being completely ludicrous, far more comical than the show, and impossible to take seriously. But there’s a lot of wit and fun along the way. The book makes me wish the show had contained a little more of Mars and Singer’s humor to lighten the dourness.

Aeon Flux fans probably can’t trust one word of The Herodotus File. Peter Chung (who had little involvement) says it should be viewed as a work of propaganda or disinformation. Unreliable. It’s a window into the Aeon Flux world, but not an accurate one. Take it as seriously as brings you pleasure.