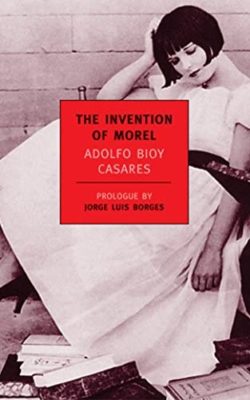 Adolfo Bioy Casares was an Argentinian author, and The Invention of Morel (1940) is his most famous work.

At 100 pages long, the book is sleek and deadly, like one of those rockets with every planar surface graded away to minimize wind drag. It evolves Siddhartha-like through several distinct forms: a Robinson Crusoe-like adventure tale of a man surviving on an island, then a “William Wilson”-like horror story about doubles and dopplegangers, then a disturbing science fiction tale from the speculative side. Prominence romance elements keep the story anchored throughout, although it’s not romance of the usual kind.

The island-stranded protagonist doesn’t warrant a backstory: he has done something bad and is a fugitive from justice; that’s all we know. He’s not alone on the island: there are some dwellings that are inhabited by strange tourists. He soon grows afraid of these people, and not because he thinks they might report him to the police. There’s something very peculiar about them. Their party never ends. They play two pop songs – over and over – until the sound seems hammered permanently into the air.

In time, he notices a beautiful young woman. He’s attracted to her – even though there’s something unusual about her too. She doesn’t react to him, and she behaves as if he’s not there. Confusion about the island and where exactly he’s ended up cause him to explore, find things he’s not supposed to find, and make some world-shattering (or mind-shattering) discoveries.

Adolfo Bioy Casares is often compared to Borges. They were friends, countrymen, colleagues. Bioy’s imaginative faculties are dimmer than Borges, but he’s more successful as a teller of tales.  Borges work is a little like a puzzle box: there’s satisfaction in watching pieces slide together and a solution appear, but often there’s not really a story there. Bioy is a lot like Edgar Allen Poe (or, hell, Edogawa Rampo) – he takes dry ideas and wraps human flesh around them, making his scenarios seem real and scary. The story’s third act is as nailbitingly intense as anything I’ve read in recent memory.

Invention of Morel is a jostle of influences and sources, both fictional and nonfictional. HG Wells The Island of Dr Moreau is a pretty obvious inspiration (Mor-el/Mor-oh). The character of Faustine is based on silent film star Louise Brooks, who Bioy was reportedly obsessed with. But that’s the interesting thing – did he ever really know her?

Louise Brooks was famous for her pictures, maybe immortal because of them, but an actress’s fame is a kind of living death. Brooks is going to smile and giggle and tempt in Pandora’s Box for a thousand years, or however long people still watch it…but the smile will be cold, the laughter will be as robotic as that of a coin-operated machine, she’ll walk eternal steps dictated by a film director. The real Louise Brooks died long ago. The fake one lives on, the way an insect’s molted shell often outlasts the soft, pulpous creature that crawled out of it. But which of the two did Bioy fall in love with? Certain primitive humans think cameras steal souls, and maybe they’re right to.

Nonfiction influences include Malthus’s economic theories, which end up joined with the book’s primary concerns in an interesting way, and the de Broglie hypothesis of matter being made up of waves. More generally, it plays on terms set  by George Berkeley’s subjective idealism – the idea that perception is king, and that physical objects only exist to the extent that our senses perceive them. The idea is that if you overlay a combinations of visual, audible, tactile (etc) data using a machine, you will have, in some sense, created the thing you’re depicting. Bioy’s version of this technology is vague and impossible, but it’s not altogether absurd as a concept. A lot of things in this universe seem to hinge upon observation. And a lot of technically nonexistent things (such as nations) exist because we will them out of the ether.

The Invention of Morel seems well ahead of the curve, which is generally where you want science fiction to be. It presages things like the parasocial relationships of the online era. I enjoy books that drag together unlike influences together like oxen and make them pull the ploughshare of a story, and few achieve this with Bioy’s skill.