The Jimi Hendrix Experience – Are You Experienced? 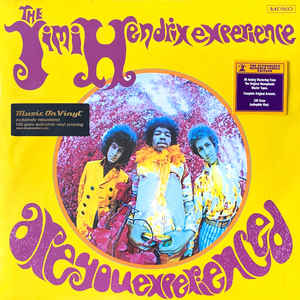 I enjoy electric guitars. But it’s time to face the facts: they suck. They are literally among the worst things to ever exist: ranking alongside the Hindenburg, the Spanish Inquisition, and the Sandakan death marches.

Ask ten audio engineers to vote for the worst instrument to mix, and you’ll get eleven votes for “electric guitar”, because one of them put on a fake mustache and voted twice. They are nightmarishly difficult to work with in the mixing room. Their range of frequencies swamp the mix, and they handle post-processing terribly. Other instruments have lows, mids, and highs. Electric guitars have blurf, mud, and fizz. They never, ever sound right. To fit them in a mix, usually every other instrument gets gutted and castrated.

Imagine a finished mix as a parking lot, with every instrument neatly parked in place. Electric guitars are like a Lamborghini Murcielago screeching in, swiping paint off a car, dinging another car in reverse gear, and illegally double-parking across two spots.

So why do people put up with this terrible instrument? Well, think back to the parking lot metaphor. If you saw a Lambo doing that (and its driver going unpunished) you’d think “that car belongs to the boss. Or the boss’s son. Or someone too important to fire.” This is the case for electric guitars. They’re valuable. They cannot, absolutely cannot, be fired.

Guitars are simply the most emotionally expressive instrument in the Western canon, aside from the human voice itself. The range of musical colors you can paint and moods you can evoke with them is staggering. Add guitars to a song and it instantly becomes a little more human. Remove guitars and it will instantly sound a little more dead. Add electric amplification, and guitars gain a dark Nietzschean transcendence, surpassing humanity and achieving superhumanity, speaking with a voice of metal and lightning and fire.

If guitars are tools for self-expression, Jimi Hendrix was the master toolsmith. He did things nobody had done before, things nobody had imagined possible. He bridged worlds, electrifying connections between black and white, technology and psychedelia, politics and personality, cult appeal and mainstream success.

Hendrix rewrote the book of rock, inspiring nearly everything kids would consider cool for the next forty years and counting (even modern EDM, with its grinding, distorted rhythms and pitch-bent synth lines, owes a distant debt to Hendrix.)

Much of what made him great is collected in Are You Experienced, which was cut between 1966 and 1967 in London. The US and UK editions contain different tracklistings, but all capture a band near the peak of its power, and a one-of-a-kind frontman.

Hendrix’s playing has the grungy, grotty, familiar quality of a heavily-used toothbrush, and although his licks and rhythms are derived from blues, he reshapes them into something new. “Purple Haze” is powered by a syncopated E7#9, a tonally ambiguous chord which was previously mostly heard in bebop. But “Purple Haze” is not bebop. Syncopated and driven hard against Mitch Mitchell’s drums, it sounds so hot and energizing that it smokes. When the world hears this chord, they hear Hendrix.

Songs such as “Red House” are a bit more formal, hewing to a twelve-bar blues vamp. “Hey Joe” fuses lyrical storytelling with an apocalyptic intensity that builds as the track progresses. It’s like having a train bearing down on you. Hendrix was doing the loud-quiet dynamic of grunge literally decades before grunge existed..

Hendrix’s singing is usually cited as a weak point. But limited though his vocal ability might be, I can’t imagine anyone else inhabiting these songs. Hendrix had an ability to conquer and annex the music of others. But nobody could ever do the same for him very successfully. At his best, even describing him as a musician seems wrong: he’s Zeus throwing lightning. Even his lesser cuts are unmistakably his.

Aside, from his obvious talent, Hendrix is hard to puzzle out. He was a black musician, but he wasn’t exactly a “brother”. He first learned music from Elvis Presley, loved Strauss and Wagner, had little interest in soul and R&B (which he played for money), was rejected in America and broke big in the UK, and his lyrics were partly inspired by the science fiction paperbacks he liked to read. Gather up his interests and you might assume he was a white nerd from Liverpool.

And he was a showman. This is maybe his clearest debt to the blues. Charlie Patton played slide guitar with a switchblade while holding the guitar on his lap. But Hendrix upped the ante by involving his own body, literally playing guitar with his teeth.

Which is not to portray Hendrix’s playing as masturbatory narcissism. He had politics – his electric (and electrifying) rendition of “The Star-Spangled Banner”, played at the height of the Vietnam war, is still like a slap in the face. And the cover of Electric Ladyland is shocking in ways that are hard to decode in 2021, depicting a seraglio’s worth of naked women, both black and white. This in an era where interracial relationships sometimes got separated by a rope and a tree.

He is a founding figure of popular music, in that huge swathes of modern music simply don’t decipher correctly without him. Guitarists – even wavering and bad ones – are offering you a window into their self. Jimi Hendrix did more than just give you a window – he focused his essence out onto the world like a laser beam, heating it up until it burned. The fire has not yet died.