The Poems of Georg Trakl 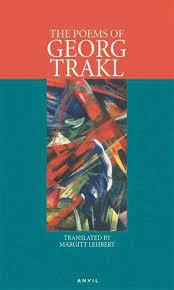 The German language has two words for silence. Stille means there is silence. Schweigen means something is silent. The change of meaning is subtle yet important: schweigen suggests that the silence isn’t incidental: something could make a sound but isn’t. Put another way, stille is meaningless silence, schweigen is meaningful silence.

English lacks this distinction and must modify “silence” into an adverb (see “keep silent” and “remain silent”) to achieve the same nuance. When encountering “silence” in an English translation of German verse I sometimes wonder whether the German contained stille or schweigen.

Purity! Purity! Where are the terrible paths of death,
Of grey stony silence, the rocks of the night
And the peaceless shadows? Radiant sun-abyss.
Sister, when I found you at the lonely clearing
Of the forest, and it was midday and the silence of the animal great;
Whiteness under wild oak, and the thorn bloomed silver.
Enormous dying and the singing flame in the heart.
Darker the waters flow around the beautiful play of fishes.
Hour of mourning, silent vision of the sun;
The soul is a strange shape on earth. Spiritually blueness
Dusks over the pruned forest; and a dark bell rings
Long in the village; peaceful escort.
Silently the myrtle blooms over the white eyelids of the dead one.
Quietly the waters sound in the sinking afternoon
And the wilderness on the bank greens more darkly; joy in the rosy wind;
The brother’s soft song by the evening hill.

Georg Trakl (3 February 1887 – 3 November 1914) loved silence, particularly schweigen. The theme of quietness – deliberate quietness – makes his poems pulse and glow. “Springtime of the Soul” (Frühling der Seele) has three “silences”. The first and second (the animal, and the sun) are schweigen. To Trakl everything can conceivably have a voice. The third silence (the myrtle) is stille, which is actually unusual for Trakl – he often uses schweigen in reference to plants, too. He revered nature, and seemed to view it without the distinctions (sapient/stupid, ambulatory/stationary, alive/dead) that others imposed. To Trakl, it’s easy to imagine a plant talking, or the sun talking. His poems describe nature’s myriad forms as the folds and nodules of a single great throat, pouring out sound or silence.

Trakl died young after living a terrible life. His poems are fragile and often hurtful to read: they actually seem bruised, like flower petals crushed by the pressure of a thumb.

Something about his brain was abnormal. Dr Hans Asperger analyzed Trakl’s writings and declared him an exemplary case of the recently-discovered syndrome which bears his name. Trakl’s poems reflect a very intense relationship with topic matter: read a few Trakl poems and you’ll see him repeating ideas and subjects obsessively – trees, plants, pastoral settings, animals in forest glades, his sister (giving rise to unfortunate rumors about an incestual relationship between the two) – which is a hallmark of autistic “special interests”.

The sensoriality of Trakl’s poems is also remarkable, the way everything is chained to a description of a color or sound. In the above poem you can see how he keeps coloring things that don’t have color – eg, souls are blue, the wind is rosy. It’s possible he had synaesthesia, and experienced the world in a sensorally conjoined way that others didn’t.

Either way, there’s a childlike quality to his verse – in a positive sense. It uses simple words and simple ideas, but they hit hard, particularly the oblique yet awful passages alluding to war. Whenever man-made sound intrudes into a Trakl poem, it’s never good. “Trumpets” is short but memorable: reaching thunderstorm-like intensity that nearly equals Poe’s “The Bells”.

Under the trimmed willows, where brown children are playing
And leaves tumbling, the trumpets blow. A quaking of cemeteries.
Banners of scarlet rattle through a sadness of maple trees,
Riders along rye-fields, empty mills. Or shepherds sing during the night, and stags step delicately
Into the circle of their fire, the grove’s sorrow immensely old,
Dancing, they loom up from one black wall;
Banners of scarlet, laughter, insanity, trumpets.

Trakl’s work is easy to memorize, particularly upon repeated readings – which you’ll have to do, because his collected work is scant. Like the modernists and romantics he took inspiration from (Baudelaire, Rimbaud, Verlaine), he died long before his time. In World War I, he served as a medical officer, and had scant opportunity to experience either stille or schweigen. After the Battle of Grodek in 1914, he was given a barn full of ninety badly wounded soldiers, and told to care for them. He couldn’t cope, tried to shoot himself. For this he was sent to a military hospital in Cracow. He assumed he was going there as a medical officer. Instead, it as a convalescent. What’s that old joke about how doctors wear lab coats so you can distinguish them from their patients?

Whatever treatment he received didn’t work: his depression was deep and total. Eventually, he tried to kill himself a second time – this time with a cocaine overdose – and was successful. Another man consumed by mechanical violence. There’s something cruelly arbitrary about Trakl’s death – the Great War caused a lot of fathers to bury their sons, but at least most of the deaths have a kind of planned badness – a general decided it was worth the lives of x many soldiers for y tactical salient, or whatever. Trakl didn’t even get the dubious honor of being cannon fodder. His death was completely and finally meaningless – just a cruel incidental byproduct, serving no purpose except to return schweigen to his sound and image filled head. The war robbed a man of his life and the world of the poems he could have written. Here’s one last -“Grodek”.

At evening the woods of autumn are full of the sound
Of the weapons of death, golden fields
And blue lakes, over which the darkening sun
Rolls down; night gathers in
Dying recruits, the animal cries
Of their burst mouths.
Yet a red cloud, in which a furious god,
The spilled blood itself, has its home, silently
Gathers, a moonlike coolness in the willow bottoms;
All the roads spread out into the black mold.
Under the gold branches of the night and stars
The sister’s shadow falters through the diminishing grove,
To greet the ghosts of the heroes, bleeding heads;
And from the reeds the sound of the dark flutes of autumn rises.
O prouder grief! you bronze altars,
The hot flame of the spirit is fed today by a more monstrous pain,
The unborn grandchildren.