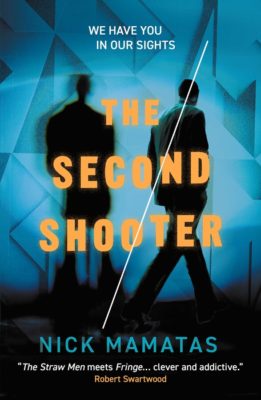 Mass shootings have killed a lot of people and created a lot of mythology: trenchcoats; clocktowers; grassy knolls; lone wolves; false flags; crisis actors; radicalization; warning signs. It’s a congealed, gruesome mass of images and slang, a culture trying to decode a thing that’s deadly, fascinating, and incomprehensible. Moths might create a similar mythology around flames, if they could.

A common trope is the second shooter. Early reports often describe two or more gunmen. This invariably proves false: the typical spree killer has no better odds of attracting an accomplice than he does a girlfriend, and with just two famous exceptions (and one unfamous one), mass shootings are conducted by a single man, working alone.

The second shooter appears to be a psychoacoustic phenomenon – scared people mistaking echoes and richochets for additional gunmen, and so on – but it’s eerily common, enough that the omnipresent advice people spam on Twitter includes “there’s almost never a second shooter”.

Nick Mamatas’s book has a strong hook: what if the second shooter was real? Michael Karras is a small-press hack-for-hire writing a book on the subject. His research isn’t going well…and then suddenly far too well, when he’s caught near the epicenter of a horrific (and strange) attack and witnesses the second shooter illusion first-hand. From there, things get weirder. His computer has been hacked. His research notes are being tampered with. Drones are following him.

I’ve read books on paranormal stuff (such as cryptids and UFOs) where it’s painfully obvious the writer stopped believing in it partway through. Karras is the opposite – a disbeliever converted by circumstance. What can he do, though? He’s up against the same paradox inside every conspiracy theory: if there were malign forces at work who could manipulate physics at will, to the point of making a person disappear into thin air…would you even try to expose them?

The story is pacey and well-written, with plenty of humor and a sharp eye for character. The dialog’s great: The Second Shooter is stuffed with thowaway lines (“Of course we have the wifi”) that just sound contextually right in a way that’s hard to articulate. Mamatas has a fantastic ear for how people talk.

The Second Shooter is a thriller, but it eschews airport novel cliches for moments of real creativity and inspiration. The book is packed with odd and unusual ideas – important plot points involve a MUD, an Ikea table, and the fact that a certain character knows what a TV rerun is – and the plot’s serpentiform twists are as unpredictable as a real mass shooting. There’s a sense of eclecticism throughout, like a song made up of all the wrong chords.

Mass shootings are absurd as well as scary (Columbine’s farcical “revenge of the nerds” narrative set the tone), and the associated culture of grifters and exploiters gives Mamatas a satirical target a mile wide. This is best seen in the character of Chris Bennett, a conspiracy-peddling shock jock (described as “having all the charisma of an empty chair”) who is clearly based upon Alex Jones. Bennett seems to view himself as Captain Ahab and Karras as Moby Dick, and there are loud hints that he might be involved in whatever’s happening to Karras. The two men are enemies, and Bennett never fails to be cartoonishly awful, but there are similarities between them, too. They both exploit fear for money. And they both exist inside a profit-driven media machine that – at a systemic level- does not want mass shootings to stop.

What Karras needed, he thought in darker moments, was another mass shooting […] Come on, special boy! Get angry! A slaughter close enough to drive to, with plenty of witnesses ready to talk about the tightly coordinated team of gunmen who had just torn through a school, or church, or shopping mall. He had the news on the radio, and the police scanner app running on his phone. Despite the shocking number of mass shootings out there, America was still a great big country, and on a daily basis a lot more people were dying of heart attacks and car accidents than they were at the hands of crazed gunmen.

I had a friend who was a kind of anti-evangelist for cryptocurrencies. He self-published a book about how Bitcoin etc are worthless pump-and-dump scams (yadda yadda)….but he himself owned cryptocurrencies! His rationalization went something like “well, if Bitcoin goes up in value, more people will want to read books about it, so I’m increasing my own market”. He was joking, but money still perverts incentives in interesting ways. Karras isn’t evil. Nothing he does is especially wrong. But he still makes his bread with the filling of graves; even if he isn’t pulling the trigger himself. It’s a grim way to make a living.

The Second Shooter isn’t perfect. It’s not easy for a book to be too smart but Mamatas wanders close to the line sometimes. The dialog (though lively and believable) has a Whedonesque quality, with constant dry quipping that damages the tension. Karras is just the cleverest fucker in the world, making jokes about Vonnegut to 7-Eleven clerks and dropping Situationist quotes into casual conversation. There’s a gag near the beginning about how Karras has only gone to mass once in ten years – maybe we’re supposed to laugh at someone called “Karras” being a bad Catholic. If that’s a pop culture reference, the book didn’t need it.

I kept hoping The Second Shooter would become rawer, less sophisticated, and more of a punch to the gut. But in the end, it’s just not that kind of book. Its ideas are ultimately Marxist/post-Marxist ones: mass shootings aren’t about blood in the streets: they’re about power relations, dialectics, images, struggles, spectacles, and so on. These aren’t irrelevent egghead distractions: if you’ve ever held an Online Opinion(tm) about whether we should publicize the name and image of mass murderers (or does this glorify the killer?), you’re touching upon ideas DeBord and Baudrillard wrote about forty years ago. It’s rare to see a genre novel that tackles such stuff directly, but The Second Shooter’s academic inclinations definitely put distance between it and the average thriller.

The ending is fascinating. Just when you’re ready for Mamatas to begin unwinding the complicated plot, he suddenly throws you into very deep waters. Like Neuromancer, The Second Shooter “resolves” itself in a way that’s actually more head-spinning than the original mystery. I liked the ending, but again, it probably won’t play well to those wanting a dumb action showdown while the hero explains what’s happening in monosyllables.

In an image-driven world, perception matters a lot, often more than the reality behind it. Once it was fashionable to talk about Fake News, usually as a club to beat your tribal opponents with. But as the second shooter phenomenon demonstrates, the biggest vectors of Fake News are our own eyes and ears. Even the clearest light and the purest sound still has to pass through your brain. If your brain thinks your genetic fitness could be boosted by perceiving something else, it stacks the deck.

In the aftermath of Hiroshima, John Hersey and Dr Takashi Nagai gathered testimony from “hibakusha”, or bomb survivors. Many claimed to have seen the bomb explode directly above their heads.[1]Bronowski, J., and Robert Jay Lifton. Scientific American, vol. 218, no. 6, Scientific American, a division of Nature America, Inc., 1968, pp. 131–35, http://www.jstor.org/stable/24926262 This is impossible – they would have instantly died. Most of them had probably been hundreds of meters or more from the hypocenter. But it shows the unreliability of first-hand experience. “I’ll believe it when I see it” used to be a skeptic’s battle cry; now it’s a credulous retreat back to faith. You can’t believe the things that you see. So what, then, can you believe?

The Second Shooter is an unusual book about a sadly common thing. It’s about a broken society refracted in broken images across broken people, where fake becomes real and fantasy supplants reality. Hunter S Thompson got off easy next to Michael Karras. What would he have done if he’d stopped over at Barstow, slept and pissed all the grass and mescaline and acid and cocaine out of his system…and the bats were still in the sky?