The Secret of Hanging Rock – ? 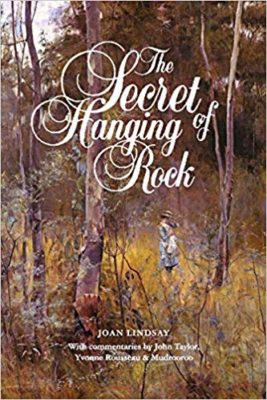 This is the supposed eighteenth chapter to Joan Lindsay’s Picnic At Hanging Rock, solving the mystery of what happened to the missing women.

I say “supposed” because the internet is rife with conspiracy theories that Joan Lindsay didn’t write it, that it’s a hoax, et cetera.

I’m not convinced. The number of parties necessary to orchestrate such a fraud (Lindsay’s estate, editor, publisher, surviving relatives, and so on) would be large, and the prose reads like Lindsay’s (for example, the usage of “little” in its diminutive/feminine sense.) Its contents also comport with what we know of Lindsay’s literary interests. Until I see evidence otherwise, I take Secret at face value: the unpublished work of Joan Lindsay.

It’s understandable that people would want to decanonize The Secret of Hanging Rock. Everyone who reads it reacts with disappointment. I don’t know of a single person who thinks it improves the book. It’s a few pages long, and much of its text was retrofitted into chapter 3 of Hanging Rock. In short, the girls disappeared into a rift in time. There are some gestures towards quantum cosmology, as well as Aboriginal “dreamtime” and therianism. That’s it.

It’s a bad, unsatisfying ending, one level above “a wizard did it”. Hanging Rock is a “who killed Laura Palmer?” type of story – the mystery’s the entire point, and explaining the mystery kills the story stone dead. You’re not supposed to know where the girls went. Hanging Rock was like a crossword puzzle in a newspaper: fun until you solve it, then it becomes a fish-wrapper.

Secret is so threadbare and underwhelming that I started pondering other things: such as the ethics of publishing a dead writer’s unfinished work. Nirvana fans are familiar with this game: every few years someone finds a shoebox of tapes and we’re subjected to yet another posthumous Kurt Cobain “album” containing abandoned scraps of music that he definitely wouldn’t have wanted the public to hear.

Is it right to do this? Release all of a famous artist’s outtakes once they’re too dead to complain?

I can see the opposite argument; authors don’t have unlimited fiat to declare that nobody read their work, particularly when it relates to something of public or literary importance (like Picnic at Hanging Rock). Consider Anne Frank’s diary. If someone wrote the cure for cancer on a piece of paper and commanded the world to never read it, we probably shouldn’t honor that request, either.

At the end, Hanging Rock was about time, and how time blurs reality. Reading the book is a maddening experience: you know that whatever happened to the girls, it’s knowledge out of your reach. Knowing what happens yanks the story back down to earth, and destroys its appeal. Hanging Rock left you like Aesop’s fox, snapping at grapes that are just out of reach. Secret cuts down the tree and lets you gorge on grapes until you’re become violently sick. Enjoy your stomach-ache.