The Woman in the Dunes – Kobo Abe 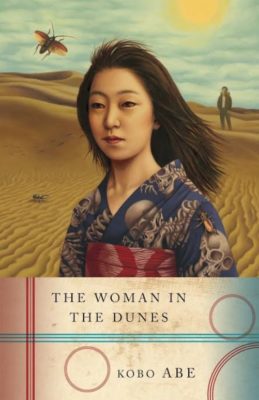 “I don’t like sand. It’s coarse, and rough, and irritating, and it gets everywhere,” – Albert Camus

Both approaches have strengths and weaknesses. Art rooted in convention is easier to understand: the audience automatically comprehends Slasher Movie #23532 in light of Slasher Movie #23531 (or the last one they remember). But it’s boring, and makes you a slave to the past: modern horror film is consequently a cesspool of spooky dolls and cars that won’t start and ghosts in mirrors and clanging ADR. By contrast, Japanese horror (at its best) achieves a monolithic starkness: I gave up looking for things like Suehiro Maruo’s Paranoia Star because I couldn’t find any.

The Woman in the Dunes is an eerie psychological novel about…sand.

An amateur entomologist is seeking a new kind of insect in rural Japan. He ends up trapped in a deep pit of sand. He has food and water and even female companionship (although she seems odd), but no way of escaping. This is not an accident. Someone just out of sight has planned this fate for him. He has a little shack that he spends hours each day sweeping clear of sand (uselessly; the wind blows it straight back in). He can’t contact anyone from the outside world. They’ll declare him dead and maybe they’ll be right to. His horizons are made of sand.

The Woman in the Dunes might not be a horror novel, as I don’t think Kobo Abe was trying to frighten. Kafka’s a better comparison. Nonetheless, I’m now aware of “ammophobia” – fear of sand. More specifically: fear of sinking into sand, swallowing sand, having sand grains between your toes, and so on. Just as Uzumaki left me uncomfortably aware of spiral shapes, I put this book down and was plagued by thoughts of sand.

It’s creepy stuff. Silken, fluid, deadly. Viewed under a microscope, sand is beautiful, but it’s inhospitable to human life, and defiant of mankind’s attempts to control it. You can sculpt a castle of sand on the beach, but the next day, it will be gone. But won’t the house you live in be gone someday, too? All of mankind’s buildings, on a long enough timescale, will become sand.

This is sort of how Kobo Abe’s protagonist rationalises his fate. The outside world is just temporarily rearranged sand and dust, so there’s no reason to want to go back. Being trapped in a hole is probably a privilege; he gets to see the truth. Ozymandias’s kingdom wasn’t overtaken by sand, it was sand.

There’s a livestreamer called Dellor who plays Fortnite and other videogames. He has a PO box, and if you mail him a package he’ll open it on stream. Occasionally, he receives sand. I’m not sure if a single person is behind this, or if it’s a shared joke among his fans. He’ll rip open an envelope, and sand will spray across his apartment. He gets keyboards with sand packed in between the letters. Once someone sent him an airsoft pistol with sand stuffed into the barrel. This annoys him, because (as the narrator of The Woman in the Dunes could confirm) sand is extremely hard to remove. No matter how much you vaccuum a carpet, in six months you’ll walk over it barefoot and feel the bite of a silica tooth: a reminder of our fundamental lack of control.

Western horror can be likened to a vine, which can be followed back to its root no matter where it goes, and J-horror to a series of mushrooms, which sprout out of the ground with no visible connection to each other. Or perhaps particles of sand. The Woman in the Dunes exemplifies the J-horror approach, even if it might not be J-horror. It has one idea. One single idea. It could have been written even if no other book had ever been published. It does not want to be the first book in the series, or to answer questions raised by another book, or to get adapted into a movie.

The Woman in the Dunes doesn’t even want to be entertaining (and frequently, it isn’t). It exists to exist. No matter what momentary order we impose on sand, in the end, it has no purpose other than to be sand.