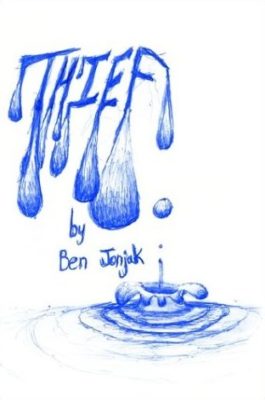 This is a self-published novella (back from the old POD days of LuLu and iUniverse, when this cost money) about a thief on the streets of Lima.

He starts out as an orphan. He gets snatched by a professional beggar who uses him as a prop to gain sympathy from tourists. He gets adopted by a pedophile priest who rapes him. And so on, and so forth. The book doesn’t do subtlety.

Thief is annoying and overbearing even by self-pub standards. Ben Jonjak takes apart the fourth wall with a wrecking ball, interrupting his story sometimes multiple times per page to rant directly to the reader about global poverty and rich Americans and white people and Oprah. Thief is one of those books that shouts stage directions at you. “Isn’t this sad? Isn’t this outrageous?” This is a hallmark of a poor writer: telling the reader what to think and feel instead of allowing those things to happen naturally.

Nobody edited this book – maybe it’s from a country where red pens are illegal. Witness the main character’s name suddenly change from “Junior” to “Patch” without explanation, punctuation both missing where it belongs and added where it doesn’t, countless orphan clauses (appropriate?), as well as lapses into outright illiteracy (an actual quote: “Take it! Seize it! Warship every day as a Devine blessing to mold yourself into a keen, perfect thing.” Calm down, Down Syndrome Tony Robbins.)

So the book has problems. It’s awkward and is barely written in English at times. But I’ll say this: although I often put the book down, I always picked it back up again. It’s strangely interesting.

The author lives in Peru, and the book evokes a convincing milieau (note that I say convincing, not realistic). Even the self-indulgent parts – by way of a foreword, he spends a few pages complaining about how someone stole his wallet – add to the lived-in quality.

And there’s actually a fairly strong story here, particularly in the final section the thief finally starts getting proactive about changing his situation. Part of what’s frustrating about Thief is that it often ignores human agency – Junior/Patch is just a punching bag for fate. In the final pages it’s nice to see him fighting back at last, even if it’s in the worst way possible.

Thief is as obscure as small press books can get without being published in an enclosed bomb shelter, and the author appears to have given himself positive Amazon reviews under a fake name, which is a shame. But I don’t feel robbed by Thief. Self-published books are often shit but they’re also often compelling, and this book manages to be both.