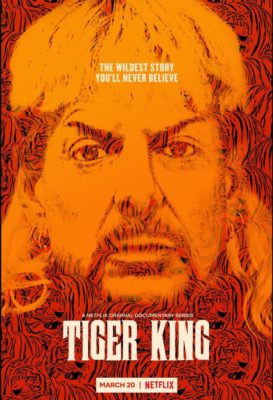 You’ve heard your friends talking about this Netflix documentary, and I suggest you see it right now, before it saturates the water cooler ecoystem and it loses its shock value. It’s sad that nobody can watch The Sixth Sense in 2020 without knowing that Bruce Willis is a ghost. I’d hurry up and watch Tiger King before it gets spoiled for you.

It’s one of the most insane things I’ve ever seen. The people in it hardly seem real. I was constantly veering between shock and laughter. “…he’d come and rub them balls in my face” gets spoken at an eulogy. A man shoots himself in the head barely off camera, and it’s not even the fifth craziest thing to happen in that episode. There’s a straightfaced discussion about whether a human body can be put through an industrial mincer.

Basically, it’s about a war between owners of big cats, which culminates in a tangle of attempted (and perhaps successful?) murders. Joe Exotic owns a zoo. Carole Baskin owns an “animal rescue” that is indistinguishable from a zoo. Both of these people have a lot of shady history: we get the sense that they’re both dangerous, as well as incapable of walking away from any situation where they see themselves as the loser.

Owning a big cat is legal in most US states: but not in a same way that owning a head of lettuce is legal. The animals are as dangerous as their owners (one of Joe Exotic’s weirdly devoted employees loses an arm in a tiger cage) and there are laws against breeding  them. Joe is clearly on the wrong side of these laws, but he needs to breed them, because it’s the only way his zoo can remain profitable.

The documentary educates you on the brutal economics of the tiger business: an adult tiger costs several thousand dollars per month to feed, and you can’t do anything with them except exhibit them. The real money is in tiger cubs, which are small enough to be cuddled and petted. Joe Exotic claims he can make a hundred thousand dollars from a newborn cub.

However, profitable cubs age into unprofitable tigers. Joe’s zoo in Wynnewood Oklahoma (aka Backup Florida) had a total 176 tigers, saddling him with staggering food bills and forcing him to breed still more cubs. The Chinese saying “he who rides on the back of a tiger can never get off” describes Joe’s basic dilemma: he’s running a tiger-based Ponzi scheme that will basically never be profitable (except in the short term). Unless he euthanizes grown tigers, which he’s pretty clearly doing.

He might have escaped notice for this, but he also starts targeting human prey. Supposed animal rights activist Carole Baskin may have fired the first shot in their war (she objects on moral grounds to the breeding of tiger cubs), but he escalates their feud to ridiculous, Wile E Coyote levels, piling up incriminating evidence against himself. The series straight away spoils the ending – Joe Exotic makes a call from his Fort Worth prison cell – but there’s no way it could have ended any other way. It’s a testament to the man’s unnatural charisma that he got away with so much for so long.

It’s hard to describe how fun and exhilerating Tiger King is. Even thinking about a few of my favorite moments overwhelms me with options. It’s like digging a hole to find gold, but the dirt you’re casting aside is also gold, and your pickaxe is made of gold too.

It’ll give you a lot to think about, too. Joe Exotic would probably still be a free man if he hadn’t effectively lynched himself via social media. But his self-exhibiting impulses were the only reason he was ever successful: albeit in a quasi-legal fashion. And in this sense, is he any different from the tigers he kept?

About ten years ago, there was a “furry” called Stalking Cat who took his feline obsession to ghastly extremes, undergoing over fourteen body modifications to become a tigress before committing suicide. Joe Exotic succeeded where Stalking Cat failed. Spiritually, he became a tiger.

The main role of tigers, in our culture, is to stand out and attract attention. If they were boring, they’d already be extinct. They survive because people love them. Joe Exotic was the ultimate charismatic megafauna. We adulated him, we feared him, and eventually, we put him in a cage.