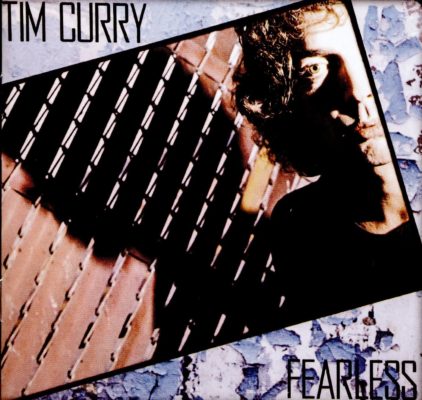 There’s a British TV figure known for his performances of a pirate, a transvestite, a mass of sentient toxic sludge, a roided-up penguin, a horned devil, and an evil clown. But enough about Boris Johnson, let’s talk about Tim Curry.

David Bowie was a musician who dabbled in acting. Curry was the opposite: an actor with aspirations of rock stardom. But where Bowie’s film appearances are (overall) remembered fondly, Curry’s albums are barely remembered at all. His failure to “break out” as a rock frontman in the late 70s evidently galled him, as seen in interviews like this one, where he takes shreds out of a journalist for asking him about Rocky Horror Picture Show (“I think that it is one of the most boring journalistic openings that I have ever heard”).[1]Magazine, Llc All Rights Reserved. “Welcome to JAM Magazine.” Jam Magazine, Oct. 1979, jammagazine.com/landing-main-feature.php?articleid=2385. These albums are sad to experience as a Curry fan: listen to them and unfulfilled dreams float past.

Regrettably, the same is not true for good music. 1979’s Fearless has one outstanding moment: “I Do The Rock” lives up to its title, shameless and vulgar and full of panto swagger. You’ve never heard “rawwwhhhkk” pronounced the way Tim Curry pronounces “rawwwhhhkk”. Album closer “Charge It” is less memorable but at least has a pulse. These two songs could have made it onto a good Lou Reed album, unlike the others, which would more or less make weight on a shitty Lou Reed album.

The songwriting is a flat line: boneheaded rockers like “Right on the Money” and “Hide This Face” sound written by hacks-for-hire from the bottom tranche of A&M’s songwriting division (dismayingly, they were written by Curry himself). Robotic performances with no dynamics means Curry has to salvage them with the force of his personality, and although he has charisma and a good voice, he doesn’t understand “singing” that well: often his vocal work devolves into shouted theatrical tirades over repetitive musical motifs. It’s amusing for a few songs, less so for a full album.

“Paradise Garage” is a would-be disco song with a Bee Gees bassline buried beneath a tacky wall of guitars and Curry (apparently) making up lyrics on the spot in the recording booth. It has all the club potential of Little Jimmy Osmond. “Cold Blue Steel and Sweet Fire” is a cover of Joni Mitchell, a woman who has dubious right to oxygen, let alone covers.

Curry needed better songs, but even if he’d had them, where does a man like him fit in Thatcher’s Britain? The most relevant cultural moment (campy, wig-snatching glam rock) had passed five years earlier – Queen aside, 1979 was year of Blondie, ABBA, and The Police. Soon Bowie and Boy George would almost be issuing public bulletins declaring that they weren’t gay. Fearless is an interesting curio from a straightlaced time, but little more. Not worth getting for one great song.

I almost forgot to tell you about the power ballad “SOS”. I have a suggestion, though. Burn a copy of Fearless, but skip over track 4. Got it? Your new copy should go straight from “I Do The Rock” to “Cold Blue Steel and Sweet Fire”. Now take the original CD and drive it to an empty field somewhere. A place where no bystanders would be hurt if six megatons of thermobaric ordnance were to strike the ground, if you catch my meaning.