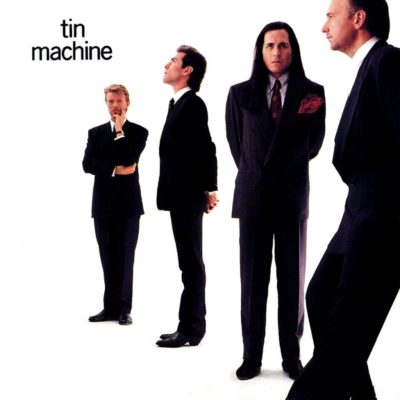 David Bowie’s career resembled a story, and in 1983 the story became an outright cliche: he hit triple cherries with Let’s Dance, his career ascended to never-before-seen heights, he flew too close to the sun, his albums became confused and over-calculated parodies of themselves, his old fans rejected him, his new ones moved on past him, everything was falling down around him, he starred in a big budget Fraggle Rock adaptation or something, etc, etc.

Tin Machine was supposed to fulfill the “triumphant comeback” part of the story. Back to the basics! No more synths, and no more selling out! Here comes Bowie, fronting a rock band! If that sounds wonderful, here comes the pain: Tin Machine’s 1989 debut is absolutely awful. It isn’t a reinvention, it isn’t a return to form, and compared to his derided mid 80s work, it’s actually worse in many respects.

The album is smug. This is hip, happening music for hip, happening people, and you can imagine it sneering at the records you’re shelving it with. Twenty years earlier, Bowie wrote “Join the Gang”, a song inspired (in part) by his exclusion from London’s counter-cultural artistic cliques. If they’d known he had this record in him, they’d have ushered him in through the VIP entrance. Tin Machine I is straight outta Gangland.

As mention, Tin Machine’s “hook” is that it’s a band. As with Eminem’s D12, you’re not supposed to notice that it contains one of the biggest stars in music (the cover underscores the point, with Bowie occupying the least amount of space out of the four). His bandmates are Tony and Hunt Sales (of Iggy Pop fame) on bass and drums, and Reeves Gabrels on guitar. Gabrels would eventually become the Ronson and Alomar of the 90s: Bowie’s trusty hired gun, and collaborator on many great songs. Here? SKREEK SKRAWK REE WEEDLE WEEDLE KERRRAAAANGG. There – you’ve heard his entire performance.

Hunt Sales is just irritating, pounding songs into the ground with flurries of 16th note snare fills. On some tracks (particularly the coda of the first one) his drumming approaches outright aural sabotage. TMI‘s music was written in a spontaneous, quasi-improvised fashion: for this to work, the four members need chemistry, and the low-grade telepathy of sidemen who have worked together for a long time. None of that intuition is on evidence here. It’s a three legged race, everyone tripping each other up.

The album’s problems become manifest as soon as “Heaven’s in Here” starts choogling away. Loud, noisy, and boring, it’s one of the worst songs on the record. “Tin Machine” sees Reeves yanking an interesting melodic idea from the upper frets, and Bowie follows it up with…nothing. “Take me anywhere!” How does the cut-out bin sound? “Prisoner of Love” is Dire Straits made dull and nondescript: it’s the musical version of a paving slab. “Crack City” is dumb (in an ironic nod-and-wink way), rocking out with a hard-edged riff and a pretty powerful chorus. Apparently the lyric is based off Nassau, where part of the album was recorded.

Health check: we are now nineteen minutes in, and have heard two good riffs and one good chorus. You call that a comeback? This is pathetic. Those junk Bowie bonds had a better rate of return. Scary Monsters gives you twice as many inspired ideas five minutes after you drop the needle, and at least Never Let Me Down offered up “Time Will Crawl” by now!

“I Can’t Read” is interesting, because it contains all the things that make Tin Machine insufferable (Reeves overplaying, Sales overdrumming, noise instead of coherency)…but it ends up being captivating. Bowie’s vocal is as raw and ugly as a half-bandaged wound as he ponders writer’s block (a topic addressed in “Sound and Vision”, although the two songs have no other similarities). At the end, he comes apart entirely. I don’t know how much of it as an act, but it’s a powerful moment.

The rest of the album blunders and crashes to its conclusion, offering up the occasionally highlight. “Bus Stop” is energetic and fun as hell – an uncharacteristic brush with hardcore punk. “Working Class Hero” can fuck right off. It joins the rare class of songs I literally cannot listen to because they make me angry (the class valedictorian is “Yassassin”, with “God Knows I’m Good” as salutorian and “The Buddha of Suburbia” third in class).

The reason I dislike alt-rock (a style that TMI is heavily inspired by), is that it holds the listener in contempt. You don’t play Nirvana’s In Utero, you’re condescended to by it. It’s smart, you’re dumb, now here’s ten more tracks of underproduced fuzz so you get the point. Bowie’s music was always clever, but it never tried to be better than the listener. “Sweet Thing” and “Warszawa” invited you to understand then. TMI is fifty-six minutes of Bowie and company gurning and giving you the finger.

All the excesses of the grunge era are here, several years too early. Bowie didn’t even fully succeed in escaping his pop persona, after EMI sulkingly released the album with stickers advising buyers that it was made by the guy who did Let’s Dance.