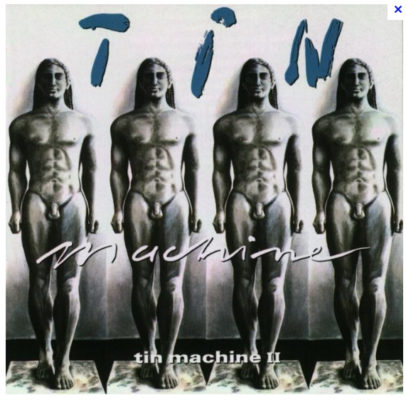 There was a fool-me-once quality to Tin Machine’s debut. Overlong, overloud, “artistic” in all the wrong ways, initially it had strong sales (unlike the bass and drums, which had rather the opposite), but the singles gained no traction, and it soon slid from the charts. When Bowie presented EMI with a follow-up, the label refused to release it.

Tin Machine II was finally issued in 1991 by fly-by-night Japanese label Victory Records. This time, nobody indulged Bowie’s vanity project. The press it received was scornful, and the album stalled out at #23 on the UK charts. For six months the band stubbornly toured it to thousand-seat venues, Bowie rapidly burning through his savings in the process. By the end of the tour, Hunt Sales’s drug addiction made it intolerable to go on, and by 1994 the band was over.

It’s a shame, because II is better than I. Time had forged the band into something stronger than their parts: Hunt Sales no longer buries the songs under drum fills, Reeves Gabrels has dialed back the noise, and David shows up with some of his best songwriting in half a decade.

Opener “Baby Universal” is a star witness in the case that the Machine deserved to exist. Driving and punishing: this song has no fat or wasted moments. Curiously, this was written in the earliest days of Tin Machine, before the Sales brothers joined the project. Bowie delivered his best work in a narrow set of circumstances: him and a collaborator, alone. Aside from the Spiders, he rarely benefited from a full band.

Other cuts like “You Belong in Rock and Roll” and “Amlapura” also present David’s maligned new project in a more positive light. The lyrics go to dark places, particularly “Shopping for Girls”, which is about Reeves Gabrels’ encounters with child prostitutes in Thailand (for an article, natch). They’re more diverse: the guitars shimmer and splash rather than just grinding like a rusty gate, and the songwriting has a bit of dynamism to it: it’s flowing water, where TMI was a series of stagnant and scum-encrusted pools.

Which is not to say TMII belongs with the best Bowie albums, or the mid-rank. “One Shot” is just obnoxious, laughably oversung by Bowie, with awful Europop “wooo-hoo-hoo” backing vocals from Tony Hunt. Astonishingly, this was a single. Perhaps Victory wanted their customers to have a beer coaster. “Stateside” is musical irrelevance personified. “A Big Hurt” is an unconvincing dad-rock take on hardcore punk.

The direst moment is “Sorry”, a musical head cold with Hunt Sales on vocals. He sounds terrible, the music meanders, and the whole thing prays to be on a floor of a cutting room variety.

Just as TMII seems to be gassing out, it delivers the greatest song in the band’s existence and the best thing David Bowie wrote in ten years. “Goodbye Mr Ed” is a threnody sung in the ruins of rock. Bowie’s vocals are both haunted and disaffected: the sound of a man demon-haunted for so long that terror has yielded to weariness. The massive ritardando capping each chorus has almost heart-freezing power, and the song ends with a crazy free-time jam from Gabrels and the Hunts. This time, it doesn’t sound comical or self-indulgent.

It wasn’t enough. Tin Machine II flopped, what little attention it got mostly revolving around the dicks on the cover. Bowie didn’t know it, but the 1991 was going to kill his band. Nirvana’s Nevermind (containing a more polished edition of Tin Machine’s noisy sound, and ironically, another cover with a dick) would come out in a few months, and instantly make Tin Machine seem tired and irrelevant. The grunge movement reshaped the musical landscape, burying artists like Tin Machine like fossils in the rock stratum of history. Faced with young and hungry bands from Seattle, there was nowhere for Bowie to go except the door.

Sometimes people survive trauma, only to die in their beds or in an ambulance. Tin Machine ambled on for a few more years, but the death blow happened in 1991. Tragically, that’s the year they made an album proving they deserved better.