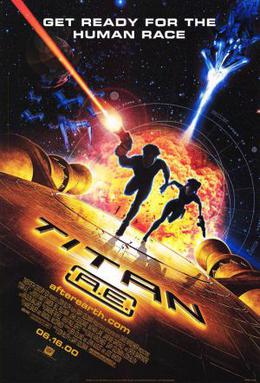 A brief consideration of the film: it’s a science fiction animated feature featuring hand-drawn characters in computer-generated environments. A thousand years in the future, humanity has built a planetary creation device called the Titan, and attracted the attention of a race of energy-based beings called the Drej, who blow up the the Earth. Fifteen years later, the surviving refugees – including Cale Tucker, whose father piloted the Titan away to parts unknown on the eve of destruction – now work as intergalactic miners and scrappers among nearby aliens. It’s a rough universe. If you ain’t got a planet, you ain’t got shit.

The plot is horribly casual and probably a spec script. The narrative is sprinkled with all the expected developments: Cale is sassy and doesn’t fit in, he has to learn to believe in himself, and so on.

The Drej (who are still hunting for the Titan, and believe that Cale is the key to finding it) are blue floating polygons who exist to be gunned down. They’re some of the blandest villains I’ve ever seen. There’s a platonic female love interest who, one gratuitous moment aside (more like Drew BARINGmore, ha ha?), might as well be Cale’s sister. Some depth exists in the charismatic but self-interested Korso, but the film doesn’t know what to do with his complications.

The science fiction setting is Star Wars derived, meaning it’s a WWI/WWII adventure set in space. It’s a world where you can fix up a broken spaceship using spare parts and axle grease. Stowing away on a spacecraft is as simple as hoodwinking a sleepy night guard. Space combat involves dodging laser blasts with a joystick while your attackers ominously beep closer on a green radar screen. It evokes the world of Biggles as much as it does actual space.

Cale’s living quarters contain relics from the lost Earth…but they’re all quaint anachronisms from the 20th century, such as a bisque doll, a hand-cranked camera, and a china cup. The movie seems split between two times. It’s set both a thousand years in the future and a hundred years in the past.

The Titan, when it’s discovered, looks rather like the Death Star, except it creates planets instead of blowing them. Again, spec script. “Borrow ideas from other movies, but twist them so they’re yours”.  Likewise, we get Waterworld’s conceit of the hero literally having a map on their body – but instead of a tattoo, the map’s written in Cale’s DNA.

The story didn’t set my imagination on fire, but I’m an adult, and this is a film made for children. Titan AE is edgier than the average Disney film, but that just means its intended audience has an age two digits long. It’s fine to borrow when your audience is encountering most of these tropes for the first time, but it’s a little disappointing, because Titan AE would have worked as an adult film. I don’t mean Heavy Metal style tits and gore. I mean more of a mature, grounded tone, more thought, more wonder, a slower build and a higher climax instead of an endless sugar rush of chases, fights, more chases, etc.

There’s one or two moments where we see the  shape of what Titan AE that could have been, like a statue writhing inside a block of marble. I liked the cyberpunk shanty town. And the final scene draws visual inspiration from Moebius’s endless horizon-spanning wastes. But in the end, this aspect of Titan AE is left frustratatingly unexplored. All it shares with the adult animated films of yore is that it made no money.

But storytelling is Titan AE‘s weak point. Its strength is its visuals, which are incandescently beautiful. There’s a ton of great background work, often featuring actual COLOR(tm), which is something Bluth forgets to include sometimes.

The environments are computer-generated, and the way the hand-drawn characters are composited into them is usually extremely well done. This movie does for CGI what Roger Rabbit did for live action – it puts cel-shaded heroes in a computer-generated world, and has them believably take up space and interact with their surroundings.

Look at the above clip: Korso walks up the stairs of the command deck, weaving his body around obstacles in his path. Out of commercially released animated films up to 2000, only Disney’s Tarzan has a better union of computer-rendered and hand-drawn images.

Animation is an odd thing: in theory computers can render anything. In practice (given you have a budget and limited computing power), there are things they can’t easily do. And these limitations are almost the reverse of live action. In live action, it’s hard and expensive to show a car plummeting out of a burning building. In animation, it’s hard and expensive to show a character opening a door, drinking a glass of water, or adjusting her hair. Animation is a game of how easily you can hide your limits, and Titan AE acquits itself well. Not without sacrifices, though. Screenwriter John August remembers having to write the movie around such directives as “the characters can be underwater, but they can’t be wet.”

The Titan is discovered, activated, and instantly destroys all narrative tension. Note that the Death Star didn’t belong to the Rebel Alliance, it belonged to the Empire. It’s hard to make a showdown compelling when the heroes have a weapon of literally godlike power – and it raises questions such as “if humanity was capable of building things like this, why were the Drej ever a threat to begin with?”

The movie ends with haunting visuals of a blank slate of a planet – and a new tomorrow for the human race. It’s pretty, but an artificially simple ending, leaving the deeper implications of the plot unresolved.

Even the film’s visuals suffer in the final minutes. Did they run out of time? Money? Both? How else to explain embarrassing shots like this, where the animated passengers look as flat as postcards (and check out the orange background underneath the third man from the left’s face due to a misaligned clipping mask.).

The film might be the fourth greatest Bluth work – worse than An American Tail, A Land Before Time, and the Secret of NIMH, but (slightly) better than Anastasia and All Dogs Go to Heaven, and much better than all the rest (A Troll in Central Park et al). That’s not bad. It could have gone further. A simple and unsatisfyingly resolved story goes a surprising way when it looks pretty. But far enough?

Despite its many strengths, the film capital-f Failed so hard it took down a production company with it. Why?

But there’s a different and more interesting theory, written by Alan Williams on Quora.

One of the better theories I’ve read about this involves the timing and promotion for the movie.

In May of 2000, “Battlefield Earth” was released…and BOMBED. It was critically panned, it did horribly at the box office, and pretty much became a punch-line overnight. This is a film that is routinely mentioned in conversations of “Worst Movies of all Time”.

A month later, “Titan: After Earth” was released.

Fox had promoted “Titan: A.E.” as “Titan: After Earth” quite a bit before it’s release, and well before the release of “Battlefield Earth”. There was a shift in the ad copy to the “A.E.” tag late in it’s promotion cycle, but it was already out there.

So of course, the theory goes that the somewhat similar titles helped to doom the animated movie.

Personally, I give quite a bit of credit to this theory. It’s sort of hard to understate how BIG “BE” bombed. Cratered. It took a lot of folks down with it for quite some time. Franchise Pictures, the production company, was later investigated by the FBI for artificially inflating the production costs of it’s projects, and thus, scamming investors out of their money. John Travolta was said to have fired his long time manager over issues surrounding the film.

Is it true? It’s plausible, but I’m skeptical. I can’t find any pre-release material describing the film as “Titan: After Earth”. And you wouldn’t think Scientology/Travolta vehicles would have a lot of market overlap with fans of Titan: AE.