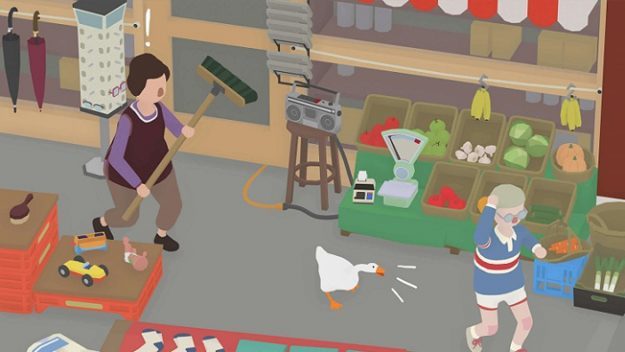 The last bastion for socially unacceptable behavior is when the perpetuator is an animal. They attack us, and destroy our property, and it’s hilarious. If they were capable of speech, perhaps we’d even allow them to make racist jokes and misgender trans people.

It’s not that they lack the intelligence to understand their actions, it’s that their systems of values are fundamentally unrelatable to ours. A human looks upon a carefully laid table and sees effort and organisation; a housecat sees fun shiny objects to bat and knock around. You get the sense that even if you could explain to a housecat what it’s doing, it wouldn’t care. Misbehaving animals are funny, but also disquietening: as though we’re getting a taste of what an alien invasion might be like.

Untitled Goose Game is an indie puzzle/adventure game where you play as a goose, wandering around one of those insufferably whimsical British towns that have names like Toddlefold or Nippleshire. You have a checklist of tasks to complete, which basically reduce to “annoy as many people as possible.”

You steal laundry, destroy gardens, ruin picnics, and honk at people, The game bears some resemblance to Pulse Entertainment’s notorious 1996 adventure game Bad Mojo, where you are a cockroach, and your objectives are to basically…be a cockroach. Here, as there, you are invited to reject your own species, and view them as the Other. Most humans (with the exception of two women who find the goose hilarious) are enemies, to be avoided or navigated around.

It will take you a couple of hours to beat. When the game is on the verge of overstaying its welcome, it ends.

The graphics are cell shaded or flat shaded (or whatever the fuck the trendy term for it is now), . Environments are clean, while retaining enough detail to have verisimilitude. The human models walk with a jerky, odd gait, but I believe this is intentional: from a goose’s perspective, humans are ridiculous. The music is dynamic, changing to reflect the in-game action, and the sound design is nicely detailed (the acoustics of the goose’s honks change when its beak is inside a glass bottle, for instance).

I grew weary of debates about games vs art a long time ago. Most of the games praised as “artistic” are in fact regurgitations of cinematic tropes. They only seem profound because you’re comparing them with Candy Crush. In a 2010 Cracked column, Robert Brockway praised the “artistry” of a scene in Call of Duty: Modern Warfare where you crawl around and die of radiation burns. Is this the groundbreaking artistry of videogaming? Cultural commentary about how war is hell?

Untitled Goose Game is a clearer statement of videogaming as an art form. It has no story, no “point”, and ludonarrative interaction drives the game. Even title seems more suggestive of a painting (where it’s common for work) than something from Hollywood.

Untitled Goose Game is now in the inevitable backlash stage of its hype cycle, but it’s perfectly good at being what it is, even if it’s something that’s confusing and meaningless to a lot of people. It has an unusual premise, and it’s even a little philosophical. When William Wallace was arrested and charged with treason, he retorted. “I could not be a traitor to Edward, for I was never his subject.” Animals are not our subjects. They exist outside our world.