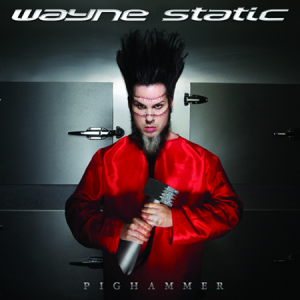 In some bands, everyone becomes famous, even a humble drummer like Ringo Starr. Then there are bands like Static-X, where there’s “the man” and a bunch of glorified session musicians playing in the background. This is frontman Wayne Static’s first solo album, and it’s no surprise that Static-X’s sound has been replicated almost perfectly, even after the loss of his entire band.

Static-X pretty much broke up two years ago, with the band members going their separate ways (and slinging harsh words back and forth on Blabbermouth). Wayne used the break to work on a long-promised solo record, now released as Pighammer. Since Wayne had always mentioned that he felt that he was creatively tied down in Static-X I was genuinely curious as to what it would sound like.

Well, it sounds like Static-X. Pantera/White Zombie influenced metal riffs, trancey synths, catchy rhythmic gibberish for lyrics. The changes are chiefly production related. The guitar tone sounds processed and scooped out, just a really fuzzy and big version of Rammstein’s sound. The drumming is mercilessly triggered, without the “natural” tone Static-X dabbled with for a bit on Cannibal.

Static-X hasn’t released a 100% good album since 2001, and Pighammer likewise doesn’t live up to the expectations one might have, but Wayne still writes a fair amount of good material. “Chrome Nation” is an obvious winner, fast, catchy, and loaded with energy. “Assassins of Youth” is apparently based on Wayne’s experiences in the wonderful world of drugs (with the trance-inspired second half representing his decision to go clean). “Thunder Invader” has a lot of double-bass percussion, and a deliberately noncatchy chorus that somehow works.

But as soon as Pighammer slows down and starts bombarding you with the midpaced groove songs Wayne loves so much, things suffer. Tracks like “Static Killer” and “Shifter” are sonically monotonous and flat, without the atmosphere and creepiness Wayne used to command on Static-X classics like “Stem” and “Cold”. The closing track also bombs hard. I could have done without the unnecessary guest vocal spots for Wayne’s ex-pornstar wife, by the way. Wouldn’t it feel weird to kiss a woman on the lips and know that she’s had like 900 penises inside her mouth? Oh well, if you can’t be the first, you can be the next.

Pighammer is meant to be about Wayne’s personal transformation. It’s great that he’s transformed, but his music certainly hasn’t. Static-X had a really cool sound for a while, but it seems the band (even if the “band” is only Wayne) bleeds out more energy and inspiration every time they copy the formula.