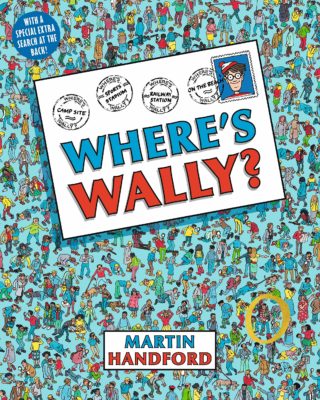 Wally/Waldo is a man in a red striped jumper and bobble hat, hiding somewhere in a complicated picture. Why does he wear such a distinctive outfit? Why not wear black clothes and blacken his face and hide in a coal mine?* Because Wally’s not actually hiding. You’re supposed to find him.

The appeal of games – from Martin Gardner puzzle books to Super Mario Bros – is this: they want you to succeed. Games, by definition, are designed so you can win. Reality isn’t like that, and people addicted to games are often addicted for good reason.

But Where’s Wally puzzles are fascinating even when you’re not an addict. They carry a magical enchantment – one glance sucks you in, and then you’ve spent five minutes looking for a ridiculous bobble hat. Or ten minutes. Or however long it takes. I’ve heard disturbing stories of people posting edited puzzles online with Wally removed. And you thought you didn’t support the death penalty.

I wonder how many children were subconsciously influenced to become programmers by these books. Finding Wally takes skill as well as luck: it’s fundamentally a search problem, and there are several ways to find Wally.

The most obvious method is a blind fishing algorithm; let your gaze wander around on the page until you spot the striped jumper by chance. This is a poor method: it’s hard to remember the places you’ve already looked and you’ll probably check the same place multiple times. Also, the human eye is a biased sampling tool. It’s drawn to busy, high-interest areas, which won’t necessarily contain Wally.

A better method is to cut the page into a 10*10 grid of tiles (either with your eye or a knife), and examine it square by square. You’ll find Wally eventually, but it might take a long time: if you start looking top-left and Wally’s at bottom-right, you’ll have to check every single tile.

Is there a faster way? Yes. Remember that not every tile is equally likely to contain Wally. Some contain empty water or empty sky. More fundamentally, you’re not looking for Wally; he doesn’t exist, you’re looking for an illustration on a page containing red ink. Any square without red will ipso facto not contain Wally, so throw all of them away.

You are now left with a small number of tiles that maybe contain Wally. Speed up your search still further by remembering that Where’s Wally is a book, and the author rarely puts Wally on the edge of a page (because you’ll look there when you turn the page), or in the top left corner (because there’s a text box there describing the environment). Arrange your tiles so that the unlikely ones are on the bottom. Using this method, you’ll have tiles sorted high-probability to low-probability, and you’ll probably find Wally after picking up just a few. That is, if you don’t suffer a fatal heart attack from EXCITEMENT.

It’s possible to solve a Where’s Wally puzzle quickly, just as it’s possible to eat an ice cream in ten seconds, but part of the appeal is taking your time and enjoying the art. Where’s Wally pictures are packed with more detail than a Persian carpet, containing so many people that they don’t even look like people: they’re objects, like a strew of spilled jellybeans. Author Martin Handford owes a debt to horror vacui, an art approach that relies on filling everything with something.

Despite occasional verisimilitude (a tiny exposed breast on page 2 has earned Where’s Wally repeated bans from bookshelves), the overall effect is to distance you from life. Everything becomes a sea of human-shaped noise, as dead as a TV screen tuned to static…but you have to find a man in the static.

I remember an animated Where’s Wally cartoon that missed the point: they turned Wally into a heroic protagonist who goes on adventures, which is necessary for dramatic purposes but destructive to the spirit of the books. He’s supposed to be a face in a crowd. He could be any of us. He’s not special – or is he? How would we even tell? Are we Wally to someone else? If so, how easy should we make it for them to find us?

We live in a Where’s Wally puzzle as wide as the Earth. We’re born knowing nobody except a few family members. From the remaining 99.99999% of the human race, we’re supposed to locate friends, associates, and romantic partners. Some people find Wally with instinctive ease. Others struggle, and rely on sorting algorithms such as dating sites and social media. And still others don’t try at all, because failure is terrifying.

Climb up to a high place in a busy city, and look down at the thousands of people flowing in pulses, as if a great beating heart is driving them.  Think of how little you know about them. Some of them rescue pets from burning buildings. Some of them rape and strangle children. The world is a huge inscrutable horror vacui of saints and sinners. Do these people want to help you? Harm you? You don’t know. You’re forced to guess based on tiny signs, small clues. Instead of a striped jumper it might be a word, a gesture, or an insincere smile that doesn’t reach the eyes. Perhaps this is why Where’s Wally is eerily compulsive: we hear the echo of our lives inside it.