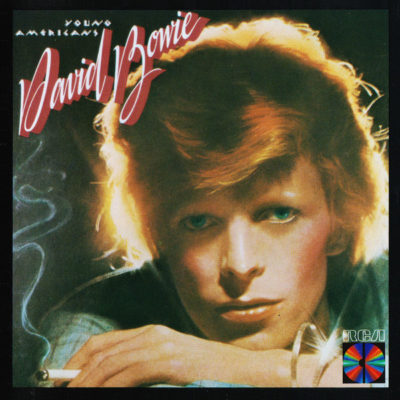 My least favorite of the classic DB albums. I don’t like soul music much, and the songs tend to rely upon “call and response” vocal patterns more than actual melodies, which is a shame.

But it’s still special, and contains two of his finest songs. Bowie (at least at this stage of his career) didn’t compromise much: once he picked a style to explore, he carried it through to its conclusion (although whether said conclusion was “The Laughing Gnome” or “Station to Station” depends much on the year and the drugs he was taking). Young Americans represents a total break from the past. It would have bee easy to throw in some riff-driven rockers so the Ziggy Stardust fans have a lifeline, but Bowie rejected any last vestiges of the glam rock that made him famous.

Anyway, amazing song number uno: “Win”. The tone is tender and comforting, propelled by an exposed but deeply affecting vocal performance. I like “Golden Years” a little more, but between the two you have the best work he ever did in this style.

The Beatles cover “Across the Universe” misfires, though considering it also misfired in the Beatles hands, this is probably due to it being a bad song. The “nothing’s gonna change my world…” part remains bewildering: it always makes me think that the singer forgot the vocal melody in front of the microphone and is clumsily ad-libbing a new one.

The song existed as bait to attract John Lennon to the studio, and this gave us the second of Young Americans’ great moments (and a rare #1 hit): “Fame”. The song opens with brass playing a pair of 3/4 bars. The melodies seem to bloom in the air like flowers: their promise false.

The rest of the song is jittery and claustrophobic, consisting of yelped vocals over a sparse rhythm section. Carlos Alomar’s guitar riff is fascinating, jabbing you so quickly and sharply that it seems to penetrate vital organs. If “Fame” was a painting, it would be pointillism. Lennon’s guest contribution is to double the vocals – hitting you with David’s lyrics in stereo.

The rest of the album does the job to varying degrees. The title track (as with the album before it) ends up being kind of a non-event. It sets the tone, but doesn’t really. I quite enjoy “Fascination”, although I miss the heavy riffs and melodic singing.

One dud. Two amazing songs. Bowie would find that America aged him pretty fast, at this stage of his career he produced exceptional work wherever he lived and worked. A pretty amazing accomplishment: we’re watching Bowie jump into empty space…and land on his feet.