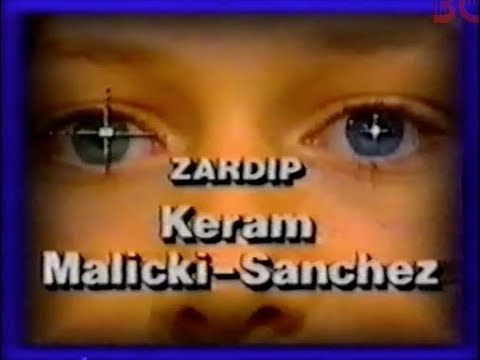 Zardip is a robot alien whose body keeps breaking down. He has come to our planet in human form to learn about dieting, nutrition, exercise, and other things that would be useless for a robot.

The show’s concept shines through like a radioactive skeleton: “Mork and Mindy, but educational”. A typical episode features Zardip interacting with his new human friends, misunderstanding some heath concept in an amusing way, and being corrected. All the usual cliches make an appearance. Is there a rap song about the importance of health? Does air contain air?

I love the show’s title more than I love my family. It simultaneously manages to be clunky, overlong, grammatically challenged, redundant (is there such a thing as “unhealthy wellness”?), and if that’s not enough, it contains the word “Zardip”. Some TV guides didn’t even print the full title, shortening it to Zardip’s Search.

Zardip’s Search For Blah Blah is live action and mostly shot on the same 2-3 sets. To break things up there’s cutaway scenes featuring 2D animation, claymation, and even a few seconds of CGI (which cost a fortune in 1988), giving it the air of a variety show. It provides basic medical information mixed with dubious factoids – it repeats the “43 muscles to frown and only 17 to smile” urban legend, for example. The end credits thank a “Dr Robin Williams”, which feels like a joke.

In the late 80s and early 90s, Canadian broadcasting achieved a striking international presence, particularly in the British Commonwealth. As a boy in Australia I saw nearly everything by Nelvana and Atkinson’s Film Art ever made. The historical reasons elude me. Perhaps the syndication rights were cheaper? In any case, Zardip’s Search For Schnorp doesn’t belong in a class with Babar and Caillou. Briefly syndicated, achieving no lasting fame or notoriety; it’s one of hundreds of shows that once existed and then suddenly didn’t.

Wikipedia questionably asserts that “the show has a cult following among Canadians who attended grade school in the late 1980s and early 1990s”. This cult must have overdosed on zero sugar Kool-Aid and died from excess Healthy Wellness(tm) because I can’t find them online. The IMDB entry for Zardip’s Search For Arglebargle has just seventeen ratings (averaging 7.8/10, higher than the last Quentin Tarantino film) and only two reviews. A VHS transfer exists on Youtube with about two thousand views per episode. It likely won’t come to Netflix tomorrow, or the day after.

Zardip is played by a striking child actor called Keram Malicki-Sanchez.  He turns in a powerful performance, reminding me of David Bowie in The Man Who Fell to Earth. What happened to him? I Googled his name,  praying that Zardip’s Search For A Printable Title wouldn’t be among the top results. It was. Oh.