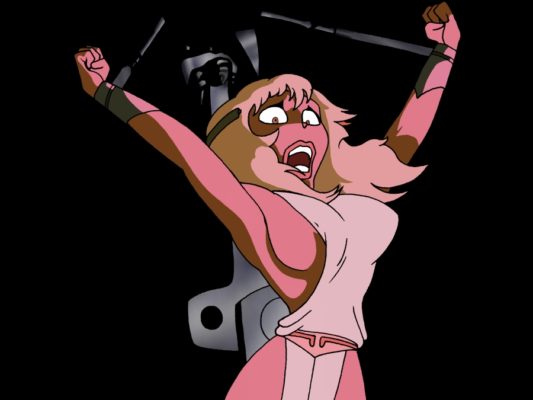 In my review of Rock & Rule, I stated that it’s an adult film with no adult content.

This is not true; I saw an edited cut. According to the Rock & Rule wiki (??!), a version exists featuring brief nudity from Debbie Harry’s character, Angel. (Described below by an anonymous superfan, who gets way too into it. The Zapruder film wasn’t this obsessively analyzed.)

For most of the film, Angel wears a conservative but stylish red blazer over a black top with matching black pants, boots and a gold belt. After Mok enslaves and drugs her, she is forced to wear a very skimpy outfit for her involuntary performance at his concert. The outfit is a dress with a bare back and a front narrow enough to expose the sides of her bare breasts. The lower half of the dress is two fabric panels in the front and the back divided by slits up to her pelvis on either side, exposing her legs to the top of her hips. Also, Angel is not only going in her bare feet, she also isn’t wearing anything underneath her dress. We can see she’s bare underneath when the breeze periodically causes the fabric panels to lift, exposing her bare tush and the creases of her pelvis. This especially happens when she is singing to the demon and the back panel of her dress flips up, revealing her bare bum.

Can the coast guard mount a rescue mission for this man’s keyboard? It’s clearly drowning in its operator’s drool. Additional credits to society chime in the comments.

Based on her haircut, general appearance, it looks like they actually modeled her at least somewhat on Debbie Harry, who provided her singing voice.

Nothing gets past Sherlock here.

Angel’s brown” fur is actually her skin. After all, “fur is skin” exists according to TV Tropes & Idioms. So her sexy, thick, buxom, toned body is exposed.

A compelling argument, backed by citation. Can I suggest a career as a lawyer? You’ll be spending a lot of time in courtrooms either way.

Yeah, I think she and would get along well to being friends and having fun as girls. Her natural personality reminds me of a lot of the I usually hang out with. You rule Angel girl!!!! <3 🙂

You shouldn’t think that, because Angel’s not your friend, or even a real person. She’s a cartoon mouse. Parasocial fixations on fictional characters are unhealthy, and you should make some real friends.

By the way, reading the heart ASCII <3 requires that you tilt your head to the right, and the smiley emoticon 🙂 requires a tilt in the opposite direction. When the two appear back to back, you’d technically have to whiplash your head 180 degrees to read the text. Pretty painful, and if you did it fast enough, it might even prove fatal.