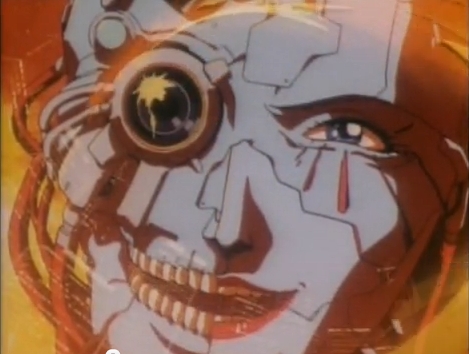 There’s a lot to like about Genocyber. It’s edgy, it’s violent, and it has a great atmosphere. But like so many OVAs, the weight is all in the packaging. Any dissection or analysis of this anime reveals there’s really not a lot at its center.

The plot looks deep and engaging at first, but almost immediately you realise it’s a ripoff of a ripoff of a ripoff. Blah blah siblings with a psychic link blah blah huge robot mechas blah blah shadowy government agents blah blah climactic transformation scene blah blah city blows up the end. The characters are mostly just stock, including the usual assortment of evil scientists and masked henchmen and a gang of street thugs lifted right out of Akira.

If you don’t care much about story, Genocyber works. It evokes a nasty and brutal atmosphere, and the thematic confusion could be interpreted as acute psychological depth. It worked for Neon Genesis Evangelion, after all. The animation is punchy and colourful, with a few CGI moments mixed in here and there. On the whole it’s hard not to be impressed by Genocyber‘s aesthetics and style, even if the content side of the anime comes up short. As with Ohata Koichi’s previous work MD Geist, the gore factor is comically high. One scene in the middle gets so outrageous and excessive that it borders on being comedic. The final battle ends with all of Hong Kong destroyed.

Things get hard to follow. Genocyber is confusing, bombastic, and over-the-top. In a way, it’s almost like its own characters, in that it’s cataclysmically fucked in the head and deserves to be in a room with padded walls. This is a definitive example of 90s anime, both the good and bad. The English dubbing sucks ass, by the way. 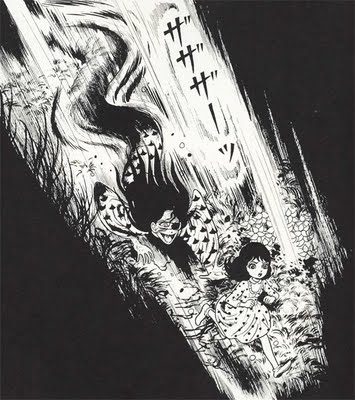 This is an old horror manga from the middle of the sixties, and it deals with subjects that are older still: Japanese yokai legends from the Middle Ages. In this case, an evil snake spirit that possesses women and turns them into regressive half human/half reptile monsters. Umezu’s conceit seems based on Nure-onna, a snake-bodied woman. There are three interlinked stories in this book, with the final “Reptilia” clearly being the centerpiece.

Umezu has made better things than this. This is his “Carrie.”, an early work expressed with a limited skillset.

The main thing that stands out is that he doesn’t do any character design. As far as I can tell, Reptilia has three characters, a generic young girl, a generic adult woman, and a generic old lady. This is highlighted during an early scene when two characters are walking side by side…and they’re drawn exactly the same except for their hair. This problem keeps threatening to derail the story, as awful, shocking things happen to…uh, samey-looking girl 1, I guess. Or maybe it’s samey-looking girl 2..

Kazuo’s distinctive art style is featured here in embryonic form. He’s always had a gift for articulating motion and making the pages seem to move (I like the parts that involve the snake women climbing to high places), but there’s little humanity in the staccato explosions of ink of “Reptilia.” The best bits of art, again, are the snake women, who look repulsive. Whenever he draws a “normal” person it’s always in that Tezuka inspired 60s style, which is too cute to evoke much feeling. Another thing that annoys me is how he keeps drawing characters with cartoonish exaggerated reflections in their eyes. This is a 60s light manga touch that makes no sense in a horror context.

As Kazuo’s story pulls you along like a tractor-beam, the manga’s problems do seem to become smaller. The plot is simple enough for children to follow but packs a fair amount of depth and intrigue. The final section is pulverisingly intense, and the final few pages that remind us that sometimes “the end” is another way of saying “the beginning.”

But if there’s one sequence that really struck me as inspired, and that’s the opening scene. A girl is visiting her mother in hospital. She encounters a woman who has been locked behind bars. She seems lucid and sane…until she asks the girl for a frog. The girl does not have a frog. However, she does have a schoolbook with a picture of the frog. The strange woman rips the picture out of the book and stuffs it into her mouth. This scene is bizarre and shocking, and demonstrates Umezu’s gifts for doing a lot with a little (although he also often does a little with a lot). 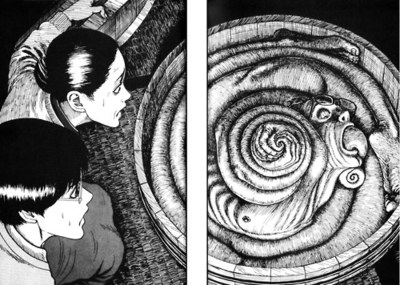 Uzumaki is the horror manga: the benchmark, the standard. It’s intense, imaginative, horrifying, and oozes dread and revulsion. Nothing made before or since beats it. Junji Ito says that he created Uzumaki because he wanted to write a story set in a small town like where he grew up. I wouldn’t personally have the courage to track this sort of stuff through my childhood memories.

It’s another canter for horror’s tireless workhorse: the Big Secret in a Small Town. Kirie Goshima’s perpetually nervous boyfriend Shuichi is having premonitions of destruction enveloping their small coastal village. He might not be fully in touch with reality. But what to make of Shuichi’s father, crouched down beside a wall and ignoring anyone who tries to talk to him as he looks into the spiral of a snail shell?

Soon, events began happening (and escalating), leaving it clear that something is happening to the town of Kurozu. People are dying terrible deaths. They might be the lucky ones. Spirals hang over everything.

Uzumaki was serialized in Big Comic Spirits starting in 1998, and there are slight concessions to the format – the way each issue is a self-contained story, with its own challenges and characters. The twenty chapters of Uzumaki fly by at the speed of light, whether it’s spent in the somber reveries of “Twisted Souls”, the slow burning psychological terror of “The Spiral Obsession” pts 1 and 2, or the funny and imaginative “The Snail” and “Medusa”. “Jack in the Box” dispenses with all subtlety and throws gore around like feces in a monkey cage, while “Mosquitoes” and “The Umbilical Cord” find Kirie experiencing a gruesome and unsettling convalescence at the town’s hospital, revealing just how deep the spiral curse has its hold in Kurozu.

The best chapter is the third one, “The Scar.” Shuichi is being stalked by a succubus-like girl with a spiral-shaped scar on her head. This story combines all of Junji Ito’s skills into something that seems low key but ends up being truly insane. Unfortunately, the big reveal has since become Ito’s most famous image, which spoils it a bit.

Uzumaki also demonstrates Ito’s excellent grasp of pacing and momentum, and his awareness of the ticking clock that happens inside the world of comic panels. There’s a powerful scene in Ch.2 where a spiral-phobic woman has removed every spiral from her body (starting with cutting off her curly hair, and then slicing the whorls of skin from her fingertips). She emerges from her self-mutilation happy, because she thinks she’s cut away every spiral from her body. …As she talks, the comic panels keep zooming in on an anatomy chart behind her…and the conspicuous spiral inside the inner ear. This scene is so well done (and unpleasant, because we can see what’s coming) that it shocked me, and convinced me that Ito is a genius of some kind.

The first two volumes advance the plot in increments, and set the stage for the third volume, which is a long plunge into hell. Ito shows off the breadth of his influences here: HP Lovecraft, Sakyo Komatsu, Katsuo Umezu, even Ishirō Honda in places. We soon have an idea that there won’t be a good ending for Ito’s characters. The ending disappointed me at first but now it seems like a mathematical equation that has been invoked and followed to an inevitable end. What can two people do against geometry? The forces are totally incommensurate.

The final chapter is a little story that seems to take place earlier in the timeline (as deduced from Kirie’s long hair). Shuichi has discovered an all-new spiral galaxy in the night sky, and soon afterwards people gain the ability to read each others’ thoughts. A decent story, but kind of unfocused and not as punchy as the others. I think of “Galaxies” as Uzumaki’s bonus track.

Uzumaki really took me by surprise when I first read it. It’s astonishing. No matter how bored you might be with horror, there’s always something capable of short-circuiting your logic and reason defences and taking a path right to your primitive, reptile brain. And maybe that path also follows a spiral.